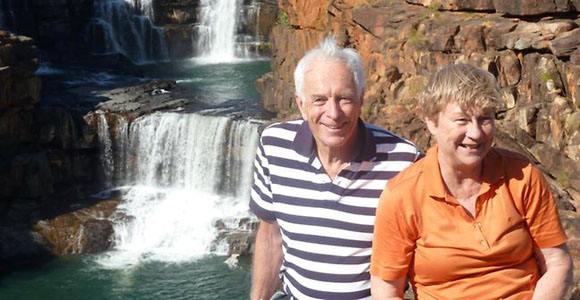 Facebook may not be the best social network for customer satisfaction but it can help with a good mystery now and again. When one couple lost their camera’s memory card, they thought it was lost for good, but thanks to Facebook it was returned. How did it go from Point A to Point B? Allow us to explain…

The mystery began in Australia and ended in Australia but not before traveling the globe in search of an answer. A memory card was found on a dirt track in the area of Burnside according to Adelaide Now.  This past Sunday, a woman named Susan Templer posted a photo of a couple from the card on Facebook and before long it had over 30,500 shares. Templer was contacted by the couple’s niece, who saw the photo shared by a friend on Facebook.

The man in the photo eventually contacted Templer and wrote, “I appreciate the efforts of everyone who has been trying to identify us…I have no idea as to how I lost the memory card – fortunately most of the photos have been downloaded and I suspect that I was using the card as a backup card as my current card was nearly full. It’s amazing how effective social media is in helping people.”

Why did Templer get involved in the first place? She had also recently lost a memory card and had replied to a lost and found ad in the local paper. The person who found the card on the trail sent her the above photo but when she realized it wasn’t from her card, decided to try and help find the owner.

“I had my handbag and my husband’s wallet stolen and they were returned by a complete stranger who found them on a walking trail, so I just want to pay it forward, basically,” said Templer.

Even more so now that the case has bee solved I suppose. Adelaide Now wrote Templer even “called tour operators, cruiselines and tourism authorities for help, even using software to find out the camera’s serial number which she forwarded to the manufacturer, Panasonic.” But it was a regular Facebook share that solved the mystery.

“It’s just completely amazing, I’ve sent them an email explaining how famous they are,” said Templer. “I was hoping someone somewhere would see the photo, so I’m completely ecstatic that his guy has seen his face everywhere. I said I hope you don’t mind being a celebrity because you’re everywhere.”