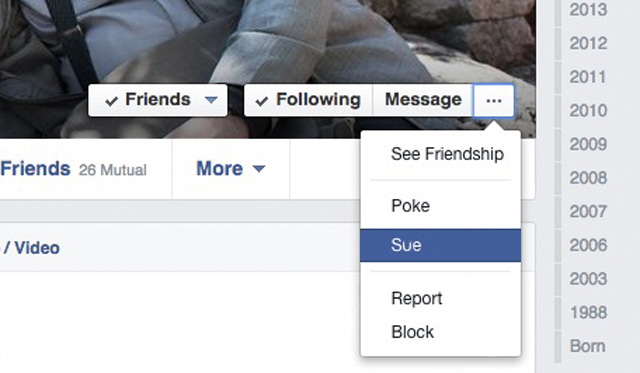 Facebook is at it again with changing what the News Feed displays and how, but a court ruling has outdone them this time. Among the celebrity gossip and baby pictures Facebook serves you, it can now serve you legal papers, while the official changes to the News Feed algorithm are just another effort to prioritize the things you see in your feed. Dear courts: Facebook doesn’t need any extra help junking up our feed with stuff we’d rather not see, thanks.

Noel Biscocho of Staten Island had been trying to serve his ex-wife a legal notice that he would stop paying child support because their son had turned 21, but she’d been successfully evading him, so he and his lawyer took to Facebook. According to the New York Post, Biscocho’s lawyer said, “The idea that physically handing someone a piece of paper is the only way to serve notice is archaic.” Apparently, Staten Island Support Magistrate Gregory Gliedman agreed, and he ruled that Facebook was as good a way as any to notify someone of what’s going on, despite what actually using Facebook might have led you to believe.

Meanwhile, Facebook has rearranged how content is organized in your feed again in their continuing quest to not give anyone what they want. Facebook announced last week that they were making changes that will cause timely news stories to show up more frequently and higher in your feed, and they’ll try to determine which posts are interesting over the long term as opposed to ones that quickly get old to help this ranking—as opposed to just showing you all the updates from your friends and people you follow in chronological order, because who wants that?

Of course, all social sites are constantly changing. Instagram is now rolling out the sponsored posts they’ve had in the U.S. to the rest of the world, and reports of Twitpic’s death have been greatly exaggerated—it’s been bought out and will remain in business, though details are still closely guarded. Still, Facebook changes never cease to disappoint in their ability to disappoint us. At least for once, the worst change to the content Facebook serves wasn’t made by Facebook.

(via The Hollywood Reporter, MakeUseOf, and Gizmodo image via our own screenshots/edits)