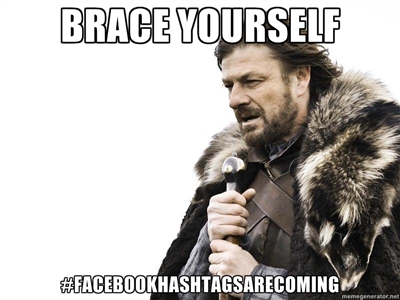 The social media behemoth—albeit less behemoth-y than it used to be since millions of people have stopped using it—has announced that they’ll introduce searchable hashtags à la Twitter, making it easier to follow what people outside your social circle are saying about a particular event, say the penultimate episode of a season of Game of Thrones. Whatever season four’s shocker is, it will now take no more than a few clicks for people who’ve read the books to gleefully watch those who haven’t experience the horror for the first time on Facebook, Twitter, and Tumblr all at once.

Facebook is kicking off the new feature today and will begin rolling it out to its entire userbase gradually. Basically it’ll work exactly like Twitter, complete with the option to see what tags are trending (Marketing Land reports that that feature will arrive in the coming weeks). You’ll be able to search for hashtags, click on them to see what other people are saying about that particular topic, and make posts directly from the hashtag search results page.

And just in case you’re worried that random strangers searching for a particular #hashtag might be able to see your post with that #hashtag even if your account’s not set to public, don’t worry. Facebook wants you to know that they take your privacy very, very seriously. Via TechCrunch‘s Anthony Ha:

A company spokesperson told me that from a privacy perspective, hashtags will work similarly to Facebook Graph Search. In other words, you’ll only see the comments that you’re authorized to see. So if I include a hashtag in a friends-only post, then my friends will still be the only ones who can see it in a hashtag search.

Gotta say, I’m glad I’ve stopped using Facebook for anything other than the occasional pic upload and status update when I remember it’s an account that I have. Figuring out what to tweet vs what to post on Tumblr (the sites have a very different feel, OK, and you have to consider that when portioning out your updates, don’t look at me) is enough without adding a third way to send my unnecessary thoughts out into the universe.