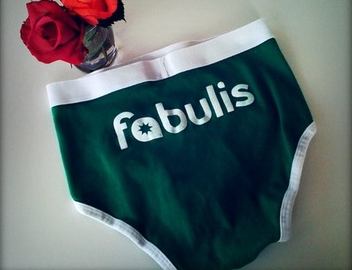 Fabulis, a gay social networking startup, discovered yesterday that Citibank has shut down its bank account over “objectionable content” on its blog, which is a Tumblr site that features a lot of pretty, fully-dressed men, some hoodies, and colorful underwear with the word “Fabulis” on them.

In an update posted today on Fabulis’ blog, Fabulis founder and CEO Jason Goldberg said that a Citibank manager “let us know that a compliance review occurred, which Citi says is a standard procedure, and the review officer determined the “content was not in compliance with Citibank’s standard policies.” They requested the account be terminated.”

According to Goldberg, the company discovered the account had been shut down yesterday because “someone(s) at Citibank had decided arbitrarily to block fabulis’ bank account due to what was described to us on the phone as “objectionable content” on our blog.  In fact, the account — it turns out — was blocked a few days ago without anyone letting us know about it by phone or email.”

In a comment on Hacker News, Goldberg said he didn’t blame the incident on malicious homophobia but instead “I think some compliance officer is a moron who made a really stupid decision.” The website’s account was scheduled to be cancelled, Goldberg added, and a Citibank employee seemed flustered in trying to explain what exactly was objectionable.

Fabulis isn’t a fly-by-night operation. In late January, it was announced the startup raised $625,000 in initial funding from a group of investors that included the Washington Post Company.  The initial investors had all previously funded Goldberg’s previous site, Socialmedian, which was sold to Xing for about $4 million in cash and stock, according to PaidContent. Goldberg worked in the the Clinton administration, raised money to fund Jobster, and his ventures includes big-name, A-list gay advisors like Richard Socarides.

What’s curious about the decision is that Fabulis doesn’t appear to be all that sexual.  Sure, there are videos of fully-dressed “twinks” with gay hair talking about how “fabulis” they are on the site.  But this isn’t Grindr or Manhunt or even ManCrunch — not that there’s anything wrong with that.  The site seems more like a cross between Yelp and Facebook, with some Travel & Leisure tossed in.

Socarides, who served in the Clinton administration with Goldberg, told Geekosystem that it appears Citi was “spooked by the word ‘gay.'” In an email, Socarides raised an important point about why a bank was investigating the kind of work an account holder does, especially given there is no criminal operation or national security threat.

“Would they review the art in the galleries of their Museum clients?” Socarides asked. “The content of the books from their publishing clients?”

A manager from Citi just called to apologize and to say that all 3 of the citibank individuals who over the past 24 hours each individually claimed that fabulis’ account was to be terminated for compliance issues around the content of our site, were all wrong to have said what they said.