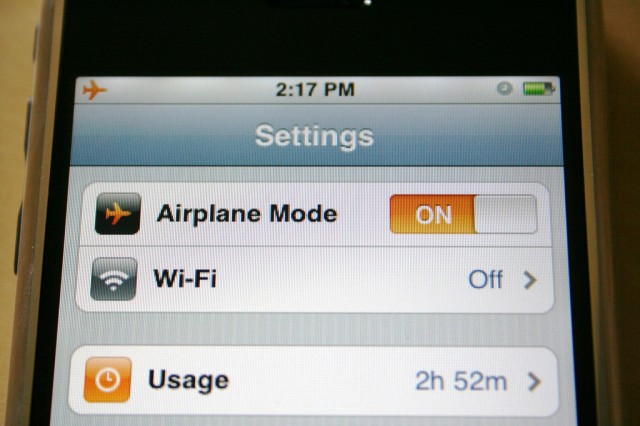 Good news for everyone who refuses to be alone with their own thoughts for any period of time! Now you won’t have to turn off the music you’re listening to, the ebook you’re reading, or the stupid iPhone game you’re playing while your plane takes off and lands. The FAA has officially announced plans to change their policy regarding these electronic devices.

Passengers will eventually be able to read e-books, play games, and watch videos on their devices during all phases of flight, with very limited exceptions. Electronic items, books and magazines, must be held or put in the seat back pocket during the actual takeoff and landing roll. Cell phones should be in airplane mode or with cellular service disabled – i.e., no signal bars displayed—and cannot be used for voice communications based on FCC regulations that prohibit any airborne calls using cell phones.    If your air carrier provides Wi-Fi service during flight, you may use those services.  You can also continue to use short-range Bluetooth accessories, like wireless keyboards.

There is a slight catch, of course — every airline needs to ensure that their equipment will be safe from any electronic interference. If the FAA is to believed, though, the new policy could be put into effect as early as tomorrow if each airline is quick to complete testing and submit a plan for approval — Delta’s apparently had one in the works for a while now. At the very least, they expect most airlines to comply by the year’s end, just in time for the holidays.

This news comes about a month or so after the Portable Electronic Device Aviation Rulemaking Committee first recommended a change in the the official PED rules. Between this and the whole “You can now keep your shoes on at more airports” thing, is air travel going to start becoming less of a hellish nightmare from which no mere mortal can escape unscathed? Possibly. We’ll suspect they’ll just keep coming up with new ways of torturing us, though, because that’s what airports are for.

Either way, the best reaction to this news came from Gene Sperling on The White House blog. “You’re welcome, Toby Ziegler,” he wrote. Like he won’t find something else to complain about.

(via The Verge, image via Pieter Ouwerkerk)