Terrafugia - Approved By FAA - God Help Us All | The Mary Sue 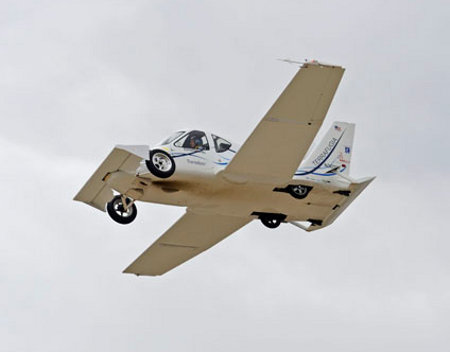 Look at that. You know what that is? It’s a flying car. Specifically, it’s the Terrafugia, a clever little Latin name playing off the idea of fleeing the ground. And despite being attached to some decent wordplay, it’s probably going to kill us all, or at least its drivers.

The Terrafugia is a legitimate flying car, with a maximum flight range of around 460 miles. That’s a lot of miles! Also, did we mention it’s a FLYING CAR. As awesome as that is, and as much as I can’t escape wanting one more than anything else in the world right now (only $194,000, people. Get me one for the holidays), I also think it is the biggest safety risk we’ve ever allowed on the road or in the air.

Now, this car isn’t actually new. People could drive it around for a while now, but the FAA, the freakin’ Federal Aviation Administration, just approved it for flight in the United States.

First of all, I’m not one to be overly paranoid about terrorism, but this seems like something terrible waiting to happen. Not only is it much easier to use covertly (it fits in your garage, for goodness sake), but it’s small and can be taken anywhere, really. Air traffic control won’t have any freakin’ idea, especially if there are a bunch of them out there. It only takes a 1/3 mile runway for take-off.

Second of all, there’s no airbag, crumple zone or roll cage to be found in any of them, making them the least safe flying machines on the planet, probably. The only thing worse would be an airplane designed to crash. Why not put safety features in your flying car? It would make it too heavy to be classified in the necessary aircraft category. Because that should matter!

Third of all, it only takes 20 hours of flying time to get a license, less than any other aircraft type.

So we have the least safe, hardest to track aircraft being sold for under $200,000, and it’s pretty easy to get a license for it.

But the people at Terrafugia explained to Telegraph how it’s actually safer than most light aircraft: You can drive it home in inclement weather.

Well, that fixes everything.

(Via Telegraph via Geekologie)