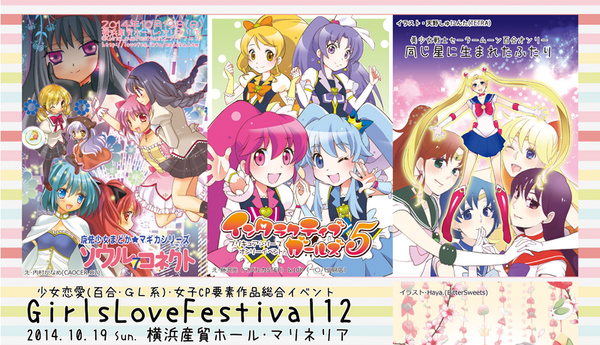 In almost any large western convention’s Artists Alley, tucked away here and there in between the series parody bookmarks and postcards, the slash pictures and color posters of “cute male couple on TV du jour,” you can find comic artists doing actual comics. These comics are often some of the most interesting finds at a convention. Depending on the size and focus of the con, you may come across artists with their own following and years of professional work, or a talented newcomer hitting up their first show.

In Japan, these self-published and small press comics inhabit a unique and lively ecosystem of their own. Called doujinshi (pronounced: doe-jin-shee), they are sold at large and small events across the country. The largest of these events is held twice yearly in Tokyo. Comic Market—known as Comiket—hosts over 9,000 groups of creators, called “circles,” a day over the course of three days. Featured will be works that parody the most popular TV shows, movies, games, and anime shows, as well as comics on more unique subjects like pets, trains, food, popular bands, and performance groups. And, of course, Boy’s Love and Yuri, or female/female anime and manga. Among the parody items, you’ll find a nice chunk of original work as well. In fact, many popular and successful manga artists get their start in doujinshi—and many continue to create doujinshi long after they’ve gone pro. Publishing companies (which have booths on the top floor of the event space, pushing their hottest series) are known to recruit from the most popular circles. 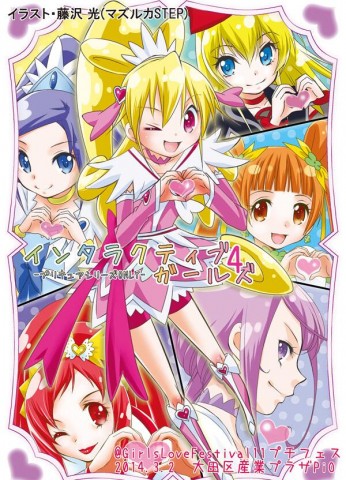 While no other event reaches the size of Comiket, there are others that are larger than most western cons. Comitia, which accepts only original works, is gaining notoriety after more than 100 events. It also now hosts the the “Kaigai” (International) Festival, the first of its kind in Japan, where North American, Franco-Belgian, and non-Japanese Asian comics by companies and individuals are represented. Many North America-based manga licensing companies now get tables there as well. The festival is co-sponsored by the Toronto Comic Arts Festival, which invites international comic artists to North American shores.

In addition to the large shows, there are many local, regional, and specialty doujinshi events in Japan. These typically are focused around an area of interest (e.g., cars), a genre (e.g., Boy’s Love), or a particularly popular series. Which at last brings me to the all-Yuri comics convention Girls Love Festival 12.

14 years ago, I started an organization for fans of lesbian-themed Japanese animation and comics, Yuricon. For the last 12 years, I’ve been reporting Yuri news, writing Yuri reviews on my blog Okazu, and organizing and attending Yuri events. My first Comiket was back in 2002, when Sailor Moon had only ended a few years ago and the Sailor Moon musicals were still running. There was a lot of Yuri doujinshi to be found parodying Sailor Moon. Then the same was true of Revolutionary Girl Utena, Maria-sama ga Miteru, Aoi Hana, and all the many Yuri favorites since. Yuri as a genre has grown slowly and steadily over the years and boasts many artists who draw lesbian-themed comics professionally, as well as those who do it for fun. The original works—made by artists who are driven to create stories of the sort that they themselves would like to read—are my favorite. 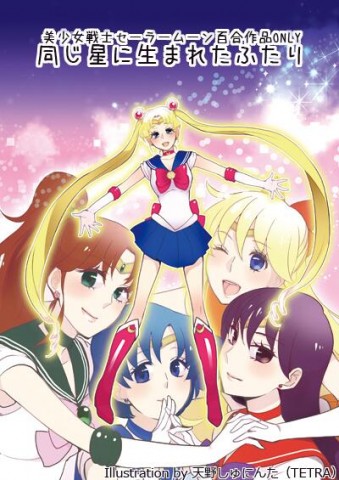 Girls Love Festival is an umbrella term—underneath it a number of series-focused shows gather. This year there will be a KanColle (Kantai Collection) show; Ai-Fest, which is focused around pop idol groups, games, and media, like Love Live and Aikatsu!; and sections dedicated to popular anime series like Puella Magi Madoka Magica, PreCure, Sakura Trick, and YuruYuri. And, for the first time ever, with the advent of Sailor Moon Crystal—I know you’re all reading Victoria’s recaps—there would be an all-Yuri Sailor Moon section. Obviously, I had to be there.

And so… there I went. There was no way I was going to miss it.

Events like this often take place in unremarkable office buildings or event spaces. This event was held in the Marineria Sanbo Hall in Yokohama, which had no markings that we could see on street level. (And Japanese maps are sometimes…vague.) There are no pictures allowed in the event (privacy is important if you don’t want your boss knowing you draw lesbian comics on the weekends), but walk with me and I’ll take you through what I experienced.

An experienced con-goer knows that before the event they should check the list of participating circles. This year I was looking forward to seeing some artists whom I know from past shows, like Takemiya Jin-sensei, who just wrapped up a number of professional series with magazines and is getting back into drawing her own work as the circle Junk Lab. I had the pleasure of interviewing her in 2013. Takemiya-sensei was happy to be there: “Sales are okay, but the event has a very positive feeling.”

Also participating was Nanzaki Iku, whose professional work on the Queen’s Blade manga has garnered way more fans than her Yuri work, but fans of her doujinshi will forever remember her as the circle named Doropanda TOURS. She echoed Takemiya-sensei’s thoughts and mentioned that she’d be working hard in days to come.

Another artist I’ve had the pleasure of working with is Kitao Taki-sensei, of the circle BQ, whose work I published some years ago in an anthology. Kitao-sensei was glad to see me and rebuked me slightly for not having more confidence in my Japanese.

A dear friend of mine, Komatsu Mikikazu-san, was there with his circle partner Sato Ransui-sensei selling books from their circle, Fantastic Yuri Rhythm. This year, Ransui-sensei debuted a new original Yuri work, “Yuri Girl,” in addition to her popular Pretty Cure fan books. She clarified that the event being held between summer and winter Comiket made sales a little slow, but she was very much enjoying the atmosphere and the fans. 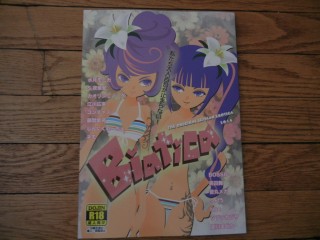 In many ways these events are places that artists with small but passionate followings get to connect with their fans face to face, and fans get a moment of time with their favorite artists. There is a special joy at a doujinshi event in meeting and seeing the work of folks you love and discovering new artists who share your enthusiasm for a series. I was able to reconnect with the manga artist I had first published, who now goes by the name Mizuki Monica. She’s really happy these days, publishing her work as part of a circle of lesbian erotica artists called “Biatika.” 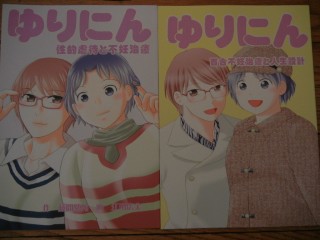 My companions for the day found the whole event fascinating. “I’m mostly interested in the meta,” academic scholar James Welker, a professor at Kanagawa University, commented. He and I discussed the symbology and lingo of Yuri fandom as I showed him how to tell which series a book is a derivative work of, and we discussed the lack of specific terminology for fans of Yuri—a topic that I’ll be writing on for a Japanese literary journal in upcoming days. We discussed authors like Fujima Shion, whose “Yurinin” can be seen to the left. Her work is a graphical memoir of her and her female partner’s decision to have a child together. She’s also the author of both Yuri and BL novels, which interested Welker. We discussed the wide-ranging audience for Yuri and that men and women and gay and straight readers have their own ways of reading Yuri that may or may not inhabit the same universe.

Another companion for the day was Yuri fan and American teacher of English Jackie S. She was impressed and amazed at the laid-back quality of the event. “It’s my first Yuri anything event,” she told me, before confiding that she was a little frightened of Comiket.

But what, you may be wondering, came of the Sailor Moon portion of the event? It never manifested. No reasons were given, no comments made as to why this might be. Guess I’ll just have to come back the next time they hold one. ^_^

Nonetheless, I picked up a lot of amazing doujinshi and had a stellar time with friends new and old.

And it’s a lot of fun to get home and get to page through your acquisitions. Years later I’m still re-reading some of my favorites among my thousands of doujinshi. ^_^

Thanks for accompanying me through Girls Love 12!

Erica Friedman writes the world’s oldest and most comprehensive blog on lesbian-themed Japanese cartoon, comics, and related media at Okazu.

Previously in anime and manga