One of my favorite trends in young adult fiction today is fairy tale adaptations. As someone who wrote their master’s thesis around the subject of fairy tales, it’s fun and fascinating to witness how authors who grew up with Disney movies and reading fairy tales are now crafting new narratives inspired by those stories, many in the hopes of creating more three-dimensional female leads to be the heroes.

In October of last year, Megan Shepherd released Grim Lovelies, the story of a teenager named Anouk who is really an enchanted animal turned into a girl. After being accused of the death of her mistress, Anouk ventures into the human world on a quest to find the killer before the spell keeping her human fades. It was a fun, story filled with engaging magical elements.

We now have the pleasure to share with you the cover art for the coming sequel, Midnight Beauties, as well as the synopsis for the book. 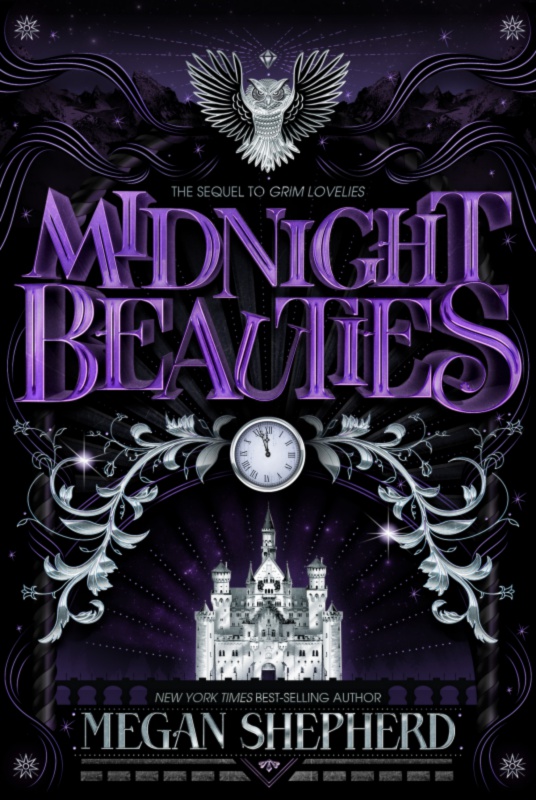 “Ever since she discovered her affinity for magic, seventeen-year-old Anouk has been desperate to become a witch. It’s the only way to save her friends who, like Anouk, are beasties: animals enchanted into humans. But unlike Anouk, the other beasties didn’t make it out of the battle at Montélimar in one piece.

“With her friends now trapped in their animal forms, Anouk is forced into a sinister deal involving a political marriage with her sworn enemy, a wicked plot to overthrow London’s fiercest coven of witches, and a deadly trial of fire to become a witch. The price for power has always been steep in the world of the Haute. Now, it will cost Anouk everything.

“Wicked and delightful, this spellbinding sequel and conclusion to Grim Lovelies is perfect for fans of The Cruel Prince and The Hazelwood.”

It’s a really gorgeous cover, and the silver perfectly complements the purple text/accents and black background. I’m super excepted to see what’s next for Anouk and what kind of magical shenanigans she gets up to, and I’m especially curious about this deadly trial of fire to become a witch, because honestly … I’m ready to do that myself.

I mean, in 2018, what could be better than actually being a witch? We can also share that the publication date of Midnight Beauties is now August of 2019. A long wait, but still better than next fall. Until then, if you haven’t already checked out Grim Lovelies, I’d recommend giving it a shot if you’re a fan of Holly Black or Stardust.

What are some of your favorite newer fairy tale stories?