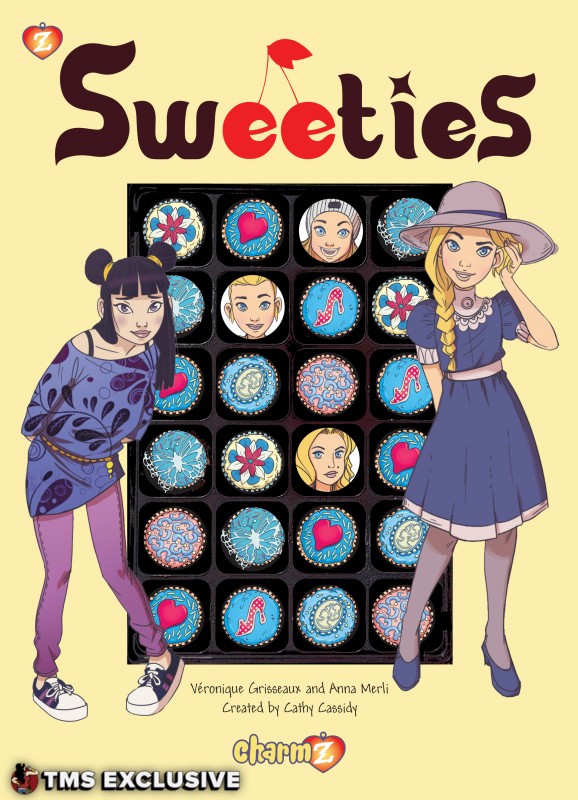 Are you ready for our third book reveal in the new Charmz line from Papercutz? Charmz is a new line of graphic novels aimed at tween girls that’s set to launch in May 2017. In a lead up to SDCC weekend, we’re revealing a new book every day this week. Check out the deets about the next book below, as well as exclusive, unlettered preview pages!

You’ve heard about monster book, Stitched, and the space book, The Great Cosmic Race. Now, it’s time for a slice-of-life with Veronique Grisseaux and Anna Merli‘s Sweeties, which was created by Cathy Cassidy. This is one of two titles in the Charmz line that has been imported and translated from another country. Based on UK author Cathy Cassidy’s popular Chocolate Box Girls YA book series, Sweeties was originally published in French before being brought stateside by Charmz.

Sweeties, Book #1 is titled “Cherry/Skye,” and contains two stories in it! Check out the official solicitation information from Papercutz:

Cherry Costello’s father, Paddy, owns a successful candy store franchise. The fatherdaughter team must relocate to a new town as Paddy has remarried to the Tanberry clan. Cherry now has four new half-sisters and must start at a new school. Trouble (and romance) arises as Cherry meets Shay, who happens to be the boyfriend of her older (and meaner) half-sister, Honey! Plus, the Tanberry twins Skye and Summer have some growing pains as they learn life is not identical for the both of them. It’s going to take a sweet miracle- or some Costello best-selling chocolates- to overcome the sour tensions in this household!

In addition to dealing with the ins and outs of a blended family, the fact that Cherry is biracial adds another layer of storytelling possibility to a story about fitting in and figuring out your identity. Meanwhile, the creative team is also a blended family of sorts, each from different countries.

Veronique Grisseaux is a French writer whose credits include work on everything from television to comics. Grisseaux first studied under Jean-Claude Fournier, a famous French cartoonist, but has since gone on to establish a name for herself through such works as Lucie s’en soucie, Totally Spies, and Bride Wars. Anna Merli is an Italian illustrator and designer. She has been involved with Disney projects in Italy, and has contributed to other series, such as Dark Horse and El Mundo. And of course, there’s Cathy Cassidy from the UK. The author of the Chocolate Box Girls series was born in Coventry, England and has published over twenty books.

Charmz/Papercutz has provided us with an exclusive first look at some of the unlettered interior pages from Sweeties! You can check them out in the gallery below!

There’s one more book reveal coming tomorrow, and it’s another title from abroad! The Charmz line debuts in May 2017. Meanwhile, you can visit the Papercutz booth at San Diego Comic-Con if you’re there this week (#1720), and if you’ve got some young’uns in your life, Papercutz will be rolling out some awesome creator signings on Sunday, which is Kids’ Day at SDCC.