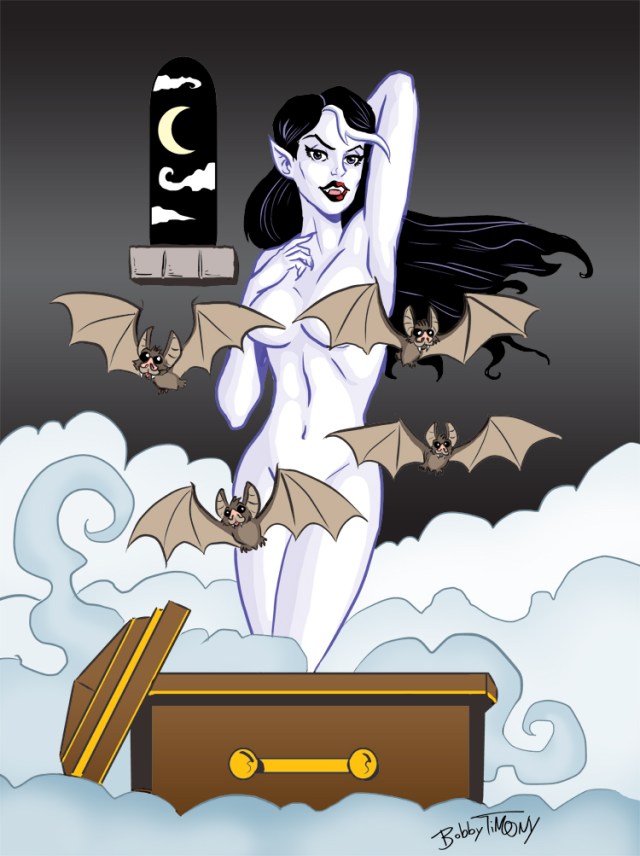 Creator Bobby Timony (The Night Owls) has a Kickstarter going for Monster Pin Up Girls, a hardcover art book and deck of playing cards. And it comes just in the spirit of Halloween. Timony has given us Molly Crabapple’s (an awesome creator in her own right) introduction to the book for The Mary Sue readers to get a sneak peak at!

She beats her wings, her voice luring sailors to shipwreck.

She has a fish’s tail for legs.

She sheds her swan skin to sing to warriors as they die.

From mermaids, to sirens, to Valkyries, the great beauties of myth have often been monsters. And why wouldn’t they be? Like extreme beauty, monstrousness is a super-power, amoral and uncanny, that sets you apart from quotidian reality. Circe didn’t take the kids to school, any more than the Minotaur worked a day job. Extremes make you a trophy, or a target.

Freaks get the best parts.

Bobby Timony’s Monster Pin Up Girls slots babes into a mash movie taxonomy. He’s drawn robogirls, she-devils, and giantesses. The Invisible Woman is present in her absence, girl indicators like gloves and stockings standing in for the girl. The lagoon creature grins, her lidless eyes orange, and her gills flapping with delight.

Timony’s drawings are joyous, adorable because he clearly adored making them.

Girls are fun to draw. I should know. I cut my artistic teeth on the beer-stained stages of New York’s burlesque revival, sketching Ruby Valentine as her boyfriend slowly unwound her mummy’s bandages. Timony’s mummy is equally joyful. Her dark fingers flick off the wrapping of last millennium, and her eyes, painted with crushed malachite, stare straight at you. She’s coming for you, viewer, to steal, or maybe eat, your heart.

The Bride of Frankenstein yawns awake, her sewn together limbs arching seductively. Sometimes, the whole is more than the sum of its parts.

Other times, the uncanniness Timony gives his muses is more subtle. His pinup cyclops is just another Betty, perky pony-tail and all, reading beneath the autumn leaves. But her bangs part over a single eyeball. His fairy looks like the hottest girl at the gay club, her absinthe pompadour and arched eyebrows saying that yes, she’ll be bringing home the bartender.

My favorite of Timony’s drawings is Scarecrow. She’s got her arms slung over that cross like Jesus with more swagger, her painted lips smirking, her missing nose pert, and her eyes fixed on you. Bitch is gazing back. No wonder that crow swoons. Behind her, wheat blows in the wind.

You’ll remember the origin of scarecrows, like that of dying and rising gods, lies in human sacrifice. Cut a young person’s throat, so the corn grows high next summer. Later, the sacrifice would be an animal. Even later, we’d be tying these human substitutes to poles. But the echo remains.

Timony’s scarecrow is looking at you like she knows something. And its this. 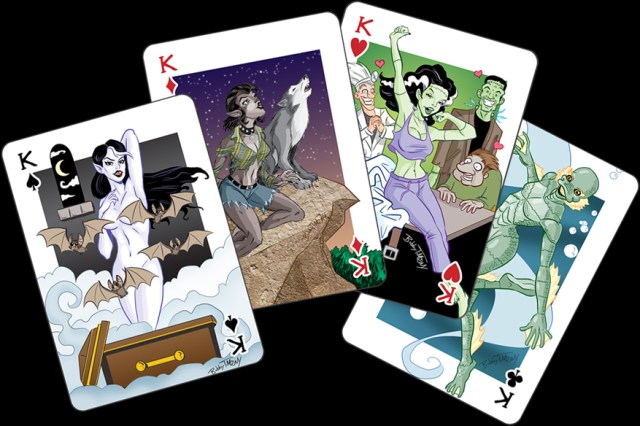 Find out more about the Kickstarter, and its rewards, here. Just six days to go!