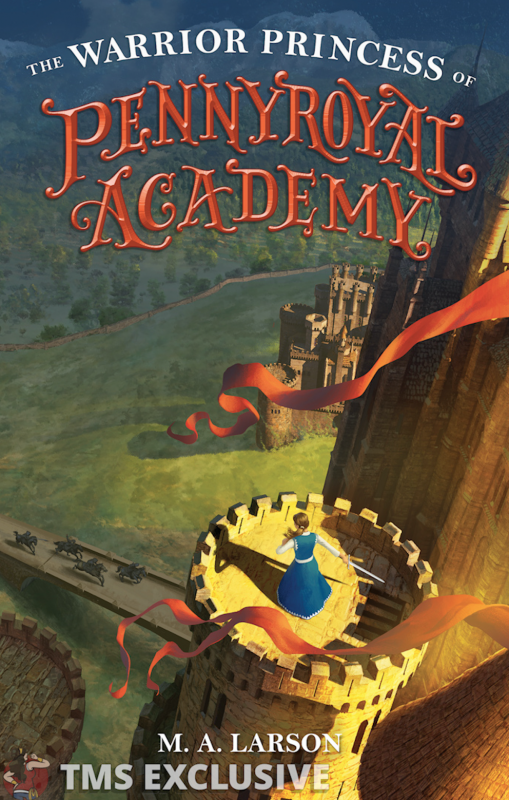 Writer M.A. Larson is set to conclude his children’s fantasy series Pennyroyal Academy with this latest installment, The Warrior Princess of Pennyroyal Academy,  and we’ve got your first look at the cover. The books take place in a reality where the title of princess is earned, not given.

It’s an important title, as the young women who train to gain it will act as the realm’s first line of defense against the evil forces that arise. Larson was kind enough to share the first image of the cover, as well as his thoughts on why young girls could use such bold characters today.

The Mary Sue: I know you found inspiration from the original Brothers Grimm stories, but were there other princesses that informed your research?

M.A. Larson: I did read quite a lot of fairy tales and folktales from around the world, but most of my inspiration came from the Grimms. I tried to load the Pennyroyal Academy books with references and characters and Easter eggs and motifs from throughout their collection, not just the big stories that everyone knows. A few years ago, I got to spend some time traveling the Brothers Grimm Trail in central Germany. I tried to infuse their lives into my books at every opportunity. Even little things tend to have some connection to the Grimms.

When I was at the House of the Brothers Grimm in Steinau, I saw that Wilhelm’s wife was named Dortchen Wild. I made a note because it sounded like such a cool name for a big, untamed piece of land. Eventually I called the huge enchanted forest surrounding the Academy the Dortchen Wild. A more specific example is a new character in The Warrior Princess of Pennyroyal Academy called Marline, who has recently finished her princess training. She comes from a Grimm story called “The Juniper Tree,” which is one of my absolute favorites. We meet her a few years after the events of that story happened and learn about how they affected her life. So while I certainly learned a lot about a lot of princesses in my research, the whole series is pretty steeped in Grimm.

TMS: Can you tell me more about the film adaptation with Reese Witherspoon? Who do you see playing the lead role?

Larson: The movie is set up at Lionsgate. I was lucky enough to get to write the adaptation of the first book. There’s a screenwriter named Calder Willingham who said that adapting your own novel is like performing an appendectomy on yourself. He’s not wrong. But it was also kind of fun to mix the story up and find new, more economical ways of dramatizing things. Once I started treating it like its own entity, rather than a literal adaptation of the book, then it became a lot more enjoyable to write. Reese is attached both as producer and to play the role of the Fairy Drillsergeant, so hopefully some day soon we’ll see her two inches tall screaming in girls’ faces. As for the lead role, it’s tricky because Cadet Evie is around fifteen years old. A lot of films lately have had huge success finding relatively unknown actors to fill the lead roles, so that could definitely be a possibility. All I know is that I want to have my Hitchcock-style cameo as a troll.

TMS: Why do you think a story like this is so important for young girls?

Larson: All of us are bombarded by so much messaging these days. I find it totally overwhelming, so I can’t even imagine how kids can possibly process it all. I remember vividly from my childhood how quiet it can be to open a book and disappear inside it for a while. So this might be more an advertisement for books in general than for mine in particular, but I think it’s vitally important for girls, and boys too for that matter, to be able to have that experience, and to have it as often as possible. Quiet the real world down and go into a fictional world where you can think and feel deeply. Pennyroyal Academy is all about a girl finding out who she is and where she fits in. Instead of social media and LED billboards and branded content, my protagonist is dealing with witches and dragons and trolls. But the core of the dilemma is the same – in a world with so much noise, so many people telling me who I should be and what I should do – who am I really?

In the fairy tales of the Brothers Grimm, the enchanted forest is often used to represent confusion and uncertainty. So I started my first book with my main character lost in an enchanted forest being pursued by a witch. She is overwhelmed and confused and doesn’t know who she is or where she’s going. Then, over the course of the series, she starts to figure that out. No matter which world you live in, that’s something any kid can relate to. This is a story with a female protagonist, but I’ve been pleasantly surprised at all the emails I’ve gotten from boys who like the story as well. As a writer on My Little Pony, I’ve had some experience writing for one gender and finding out that it is more universal than expected, and I hope Pennyroyal Academy has some of the same appeal.

The Warrior Princess of Pennyroyal Academy lands in stores on August 22, 2017. You can order online here.