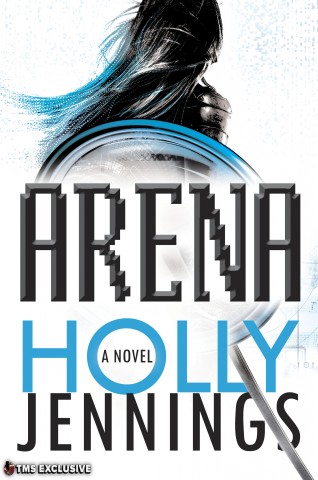 Guess what. We’ve got another exclusive to share with you lovely people today. Because we love you.

Arena, a novel by Holly Jennings, is about a woman who finds herself the captain of a team in a futuristic virtual bloodsport-type game that’s not quite what it seems. That’s super spicy, isn’t it? Check out our exclusive cover reveal above and the short teaser for the book below. This one may have just made my reading list, folks.

Every week, Kali Ling fights to the death on national TV.

She’s died hundreds of times. And it never gets easier…

The RAGE tournaments—the Virtual Gaming League’s elite competition where the best gamers in the world compete in a no-holds-barred fight to the digital death. Every bloody kill is broadcast to millions. Every player is a modern gladiator—leading a life of ultimate fame, responsible only for entertaining the masses.

And though their weapons and armor are digital, the pain is real.

Chosen to be the first female captain in RAGE tournament history, Kali Ling is at the top of the world—until one of her teammates overdoses. Now, she must confront the truth about the tournament. Because it is much more than a game—and even in the real world, not everything is as it seems.

The VGL hides dark secrets. And the only way to change the rules is to fight from the inside…

Holly Jennings is a life-long gamer who has spent innumerable hours playing World of Warcraft and Call of Duty. Arena is her first novel. She lives in Canada, where she is working on the sequel.