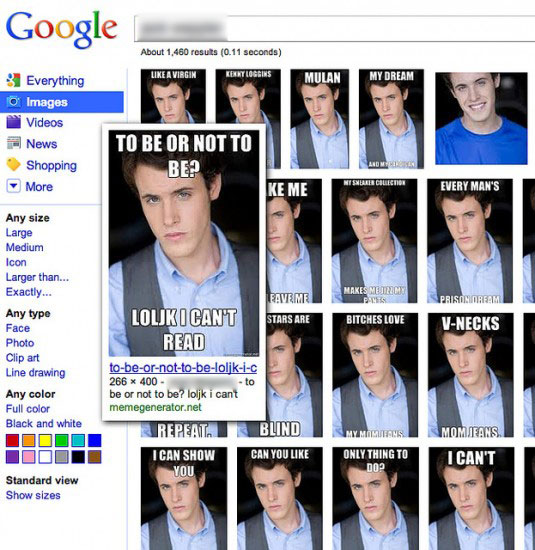 This guy must have done something pretty gnarly to his ex-girlfriend, who happens to have photo editing skills as well as the ability to navigate Google Images. But hey, word of warning: do not mess with someone who has such skills. Unless you want to end up as a really embarrassing Internet meme.

Seriously, what did he do to this girl? We all have our share of nasty, evil exes, and as much as I’d like to humiliate one of mine with this kind of viral, semi-permanent treatment, I just can’t bring myself to care enough about him and give him this kind of attention.

So either a) this guy did something beyond egregious, b) this girl now has a lot of time on her hands and wants revenge for being wronged, or c) someone is flat-out crazy (probably the girl). Could also be d) all of the above.

But what’s even weirder is that the ex-boyfriend’s mother says “we own copyright” for the original photo. Ummmm … huh? I suppose that it’s possible that this is a professional headshot, and the family owns the business that took the picture. But other than that scenario, how does a photo of your son (pretty as it is) have a copyright on it? (Answer: It probably doesn’t.)

According to the thread, there is nothing more that can be done to remove the pictures. Because here is the even more sinister level of spammery courtesy of the scorned girlfriend:

[S]he knew to have the source site remove the images but Google still has them in their index. The issue is that although the images appear to be gone, the URLs they are sourced via are actually returning a 200 status code, which to Google means they are still there. They need to return a page not found status code, and they do not.

In other words, those pictures aren’t disappearing any time soon.

My ex is sooooo lucky I don’t have SEO superpowers.