The Evolution of Sabrina the Teenage Witch | The Mary Sue

From Bewitched to Hellfire: The Evolution of Sabrina the Teenage Witch

Older than Bewitched, Sabrina the Teenage Witch has been a part of the pop culture identity of a witch for over fifty years.

When she was first created in the 60s for Archie Comics, Sabrina was a chaotic neutral style character: causing benign trouble for her fellow classmates in Greendale. Her aunts Hilda and Zelda were matronly hag-like in design, complete with warts for Hilda, and initially, Salem was a red cat who couldn’t talk. She was a half-witch, with a warlock for a father and a human mother, both of whom she never knew. The character was frequently in spin-offs and cross-overs with the Archie crew as she grew in popularity.

My favorite aspect of early Sabrina as a character was how petty she was when it came to dealing with other human characters and teachers. In “Tennis Menace,” when confronted with another romantic rival for the affections of Bruce Van Klodd III (eww, I know), she hexes a racket in order to win him over. This never wins, however, because magic for personal gain or to force love/affection is always framed as a negative. Magic in the universe of Sabrina the comic is a force for chaos and fun, but never real wickedness. There is a very clear desire to make sure that Sabrina, while a witch, is more a Samantha with a touch of Morticia Addams.

In the 90s, under the comedic perfection of Melissa Joan Hart, Sabrina became an even more lighthearted show about the coming of age of Sabrina Spellman with magical shenanigans. It was less sexy than its 90s witch cousins Charmed and The Craft, but it did extremely well and ran for seven seasons.

Sabrina the Teenage Witch is very much a product of its time—dealing with the anxieties of youth, with a very clearly 90s aesthetic. A lot of velvet mini-dresses. A lot of celebrity guests. It worked, but as the show progressed, magic became less and less an interesting part of the world and more of a plot device to turn mundane things (like love triangles) into slightly less mundane things. Sometimes it worked, but as we got to the college years and beyond, sometimes it would miss the mark.

The animated television show, Sabrina The Animated Series, pretty much built upon the foundation of the live action series, with Hart now voicing a younger Hilda and Zelda and Emily Hart (Melissa Joan Hart’s sister) voicing a middle school aged Sabrina. It was cute and had a super catchy theme song. The format allowed it to get a little more visually interesting at times, but overall, it is much like its sister show, more about high-jinks first, magic second. 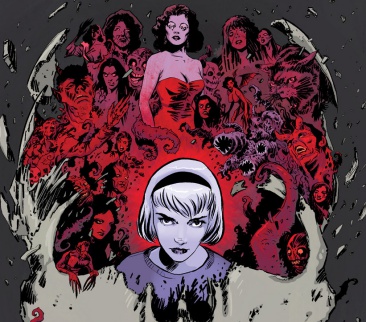 Now, Sabrina has taken a much stronger occult turn. More The Love Witch and The Witch, the comic The Chilling Adventures of Sabrina takes place in the 60s with a heavy Satanic twist (the CW is looking at making a spin-off of Riverdale modeled on Chilling Adventures). The witches of Sabrina’s world are Satan-worshipping, human/animal sacrificing witches who are ageless and powerful. Sabrina is still the result of a wizard father and a mortal mother, but instead of it being a charming star-crossed romance, her parents’ is an abusive controlling relationship that ends with her mother in her own living hell.

Without getting into spoiler territory, this serialized version of the story has a beautiful darkness to it—allowing the occult aspects to be visually terrifying and show the full magnitude of these witches’ power. Sabrina herself is a fearful presence: powerful and capable of love at the same time, with abilities that she has just begun to tap into. Each panel of the story as it unwinds draws you deeper into this universe that is rewarding with its full embrace of the darker side of witchcraft.

Witches, more than any other female supernatural creature, have gone through a narrative shift, and Sabrina really shows that. The term witch has been used to demonize women throughout the ages and by the time the Sabrina comic arrived, a witch was no longer a creature of fear, but a figure of the emerging woman—empowered and able to use her guile and mind. In the 90s, young women in the post-Craft era could relate to Sabrina using her magic to navigate through her teenage life.