10 Badass Witches To Remind You The Witching Hour is Coming 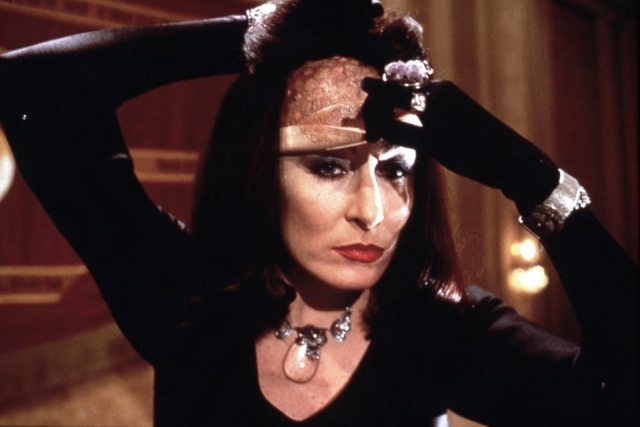 The Witching Hour is on its way and that means witches. We are here at The Mary Sue getting our broomsticks ready and celebrating good witches, bad witches, and morally grey witches who have lit up our movie and television screens with their wicked ways.

The Grand High Witch (The Witches)

As a child, I vividly remember being shaken to my core by the amazing, wicked majesty of Anjelica Huston’s portrayal of Roald Dahl’s villainess, The Grand High Witch. The leader of all witches on the planet, beneath her cool, collected and chic appearance is a demonic woman determined to rid the Earth of children. Anjelica Huston combines all the most deliciously wicked aspects of the witch into an amazing character who still gives me chills.

One if the most powerful witches in the world, Bonnie Bennett began The Vampire Diaries as a young girl who just wanted to have fun and was just beginning to discover her powers. Throughout the eight seasons, Bonnie risked life, limb and love to protect her friends. Bonnie stands out as a witch with a noble heart and the kindness of a thousand baby unicorns.

American Horror Story: Coven had a lot of ups and downs, but one of the most amazing things about the show was the dynamic female leads. Standouts, in my opinion, were Marie Laveau (Angela Bassett) and Fiona Goode (Jessica Lange). Marie Laveau, the Voodoo Queen, occupies a fascinating moral place where she is protecting her people from racism and seeks vengeance for the dead. At the same time, it slowly drives her to a place of cruelty that she isn’t always comfortable with. Fiona is the Supreme. Cold, heartless and out for her own self in every way. It is an exploration in narcissism that is delicious to watch as Jessica Lange owns every inch of Fiona’s darkness. When the Supreme and the Voodoo Queen get together, it’s Squad Goals all day.

In 1998, we were introduced to the Halliwell sisters. Prue, Piper, Phoebe and Paige are the Charmed Ones destined to vanquish evil and bring harmony to the world. In addition to wearing really of the time outfits and sporting micro-bangs (really Phoebe?). Throughout the series, the sisters dealt with love, loss and motherhood as the fought evils both internal and external. Everyone has their favorite sister (mine is Prue) and memories form a show that really taught us to believe in the Power of Three.

In the modern masterpiece The Love Witch, Anna Biller discusses all of men’s fears of women and all of women’s hidden power in the archetype of the witch. Elaine is a young witch who after the “death” of her husband moves to a new town in order to find love, but sometimes you can love hard and the dude will still be the worst. In addition to being an amazingly dressed woman, Elaine is determined to get what she wants and she’s got the magic to make it happen.

Child murderers and wicked to the core, The Sanderson Sisters have been a staple of our Halloween watching since Hocus Pocus came out. What makes them so fun despite their dark, dark history is the fish-out-of-water style comedy bits of them trying to figure out how the modern world works. Not to mention, Bette Midler slays every inch in this role from the comedy to the singing to becoming genuinely creepy at times. These sisters beat death once and with talks of a reboot, still they might again.

The OGs of television witches Samantha and her mother Endora spent the 60s making us fall in love with them. Samantha was a powerful witch who, after deciding to marry a man way beneath her, “tries” to give up witchcraft, however, you know high jinks gonna high jinks. Samantha represented a new type of woman who wanted to be a good wife but also have some kind of independence. Endora just had no f’s to give about anyone, especially not Darren (let’s be real he was the worst). Samantha’s nose wiggle and overall charm won the hearts of millions and Elizabeth Montgomery’s legacy is solidified as one of TV’s Queens.

Regina Mills (Once Upon a Time)

One of the most morally complex characters on television, Regina is a fairy-tale villain who longs at first to get revenge on Snow White by trapping her in the real world. However, throughout the series, she works to redeem herself by protecting her son and trying to be the hero all her fans knew she could be. Not to mention she has some of the best outfits ever. The character doesn’t technically exist in the newest season, but Regina Mills lives on in our hearts as a wicked woman with a heart of (mostly) gold.

The Craft Witches (The Craft)

For some of us, this was our first exposure to the girl-centric wonders of witchcraft. The Craft is a campy fun movie and filled with maybe not the most encouraging girl-power message. However, at its core, it is about girls turning to magic to try and find some meaning and purpose and power in their lives. From Sarah trying to reclaim her sexual autonomy, Nancy attempting to break away from an abusive home life, Bonnie dealing with her burn scars and Rochelle facing racism in her school these are girls who want to be in control of something. Why not magic?

No list of witches would be complete with Willow. That’s just an actual fact. One of the most influential witches of the 90s and 2000s, Willow is also a major gay icon as a lesbian who discovers her sexuality in the fourth season. What makes the character so worthwhile is that Willow is a complex character who can be driven to cruelty and darkness when her loved ones are in danger. We may not love the Dark Willow storyline, but it also allowed us to see that sweet Willow wasn’t all sweet. But look at that smile!