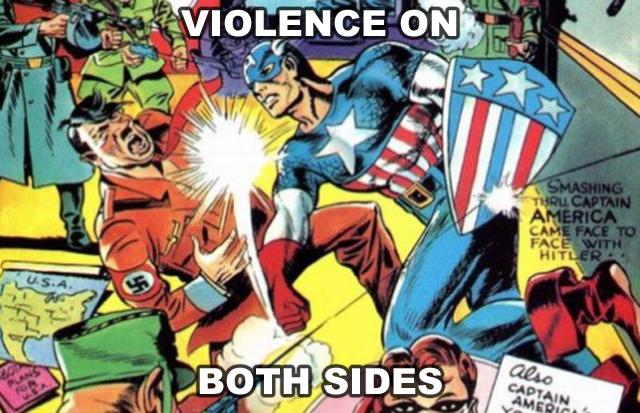 Yesterday, Donald Trump attempted to use his late condemnation of white supremacy as a shield against criticism while he blamed “both sides” for violence and death that resulted from white supremacists. His statements drew criticism from the media—generally noting that he’d gone back to his Saturday “many sides” position that everyone but white supremacists found unacceptable—as well as politicians, but leave it to the internet to truly rake him over the coals.

Not only did he try to place blame on “both sides,” but he defended the neo-Nazis and white supremacists for having gotten a permit to hold their repugnant rally, as well as their desire to preserve Confederate monuments. There’s really not a lot to say other than that we deserve a leader who dislikes white supremacists enough to blame them for violence that results from their racism without quibbling over circumstances, so I’ll let Twitter do the rest:

A member of the alt-left, without a permit, charging at someone who was just trying to preserve his culture. pic.twitter.com/hILmIPNl0I

“Look, The First Order had a permit for Starkiller Base. The Resistance didn’t have a permit. So, I think there’s blame on both sides”

[being murdered]
me: ahhh WHAT THE HELL STOP, SOMEONE HELP
guy murdering me: I have a stabbing permit
me: my mistake, I am also to blame

Charging at fascists without a permit. pic.twitter.com/EdHXnvLn00

“You had a group on the other side that came charging in without a permit and they were very, very violent.” pic.twitter.com/pG3Lhu8eQu

How dare the greatest generation not have a permit!!!! #ImpeachTrump pic.twitter.com/K3tvU5SEMo

Watching ‘Saving Private Ryan,’ a movie about a group of very aggressive alt-left protesters invading a beach without a permit.

OK, Voldemort is a murderous Death-Eater obsessed with blood purity, but Harry went to Hogsmeade without permission. So faults on both sides

Sure the Empire is evil, but nobody is talking about the extremely violent Rebel Alliance.

I dunno yal. The ghostbusters sound like a hate group. It’s possible they provoked the ghosts. I think Blame on both sides.” pic.twitter.com/WZxKfzvQTI

Look, the legality of the white supremacist rally isn’t the issue that the president should be concerned with. The issue is that, without white supremacy and actual Nazis, none of this would’ve happened. That’s why we don’t blame “both sides.” When there’s Nazi violence, it’s always the Nazis’ fault.