The brilliance of Honest Trailers shines forth as they lay out their case for every Tim Burton movie boiling down to essentials that were once innovative and are now often all too predictable.

For much of my youth, director Tim Burton was hailed as the visionary director to beat, his style instantly recognizable, his aesthetics always distinct, his offbeat ideas provoking suspense and surprise and sympathy. But these days, those same themes that once set Burton apart has caused many of his movies—especially the recent ones—to bleed together into one white-make-up-splattered jumble.

Let me be clear: there are Tim Burton moves that I think are great, like Batman and Beetlejuice, and he’s unequivocally important in the history of modern cinema, championing unique effects, stop-motion animation, and showing that quirky weirdness could be successful in Hollywood. Telling outcast stories is always an important narrative to put forth, but it’s high time for him to diversify the perspective.

My issue with Burton as of late is that I think he suffers from what I term the “J.K. Rowling-George Lucas syndrome,” wherein a creator hailed as a genius and grown immensely powerful no longer appears to have checks and balances on their creations. They’re not reined in, said no to, edited for cohesiveness, told that maybe they shouldn’t write the screenplay. The results can be disastrous and, even worse, boring and forgettable. Several of Burton’s most recent movies have been kind of a mess and felt exceedingly self-indulgent. Sometimes I wake up in the middle of the night in a cold sweat wondering how Dark Shadows was allowed to make it to the screen the way that it did.

Now Honest Trailers is here to have some good-natured fun with Burton’s oeuvre. “From director Tim Burton, who never met a studio title card he couldn’t darken,” they begin.

“Enter the mystical world of Tim Burton, which consists entirely of the suburbs, a lonely house sitting on a hill, or a lonely house on a hill overlooking the suburbs. And meet a Tim Burton protagonist, a pale loner cast out by society and/or their family, looking for acceptance and/ or revenge. Watch as they relive their tragic past through flashbacks.”

Before I even watched this video, I joked in The Mary Sue chat that what defined a Tim Burton movie for me now was a flighty and/or evil blonde wreaking havoc before a brunette heroine redeems womankind and/or the treacherous blonde woman is summarily dealt with. 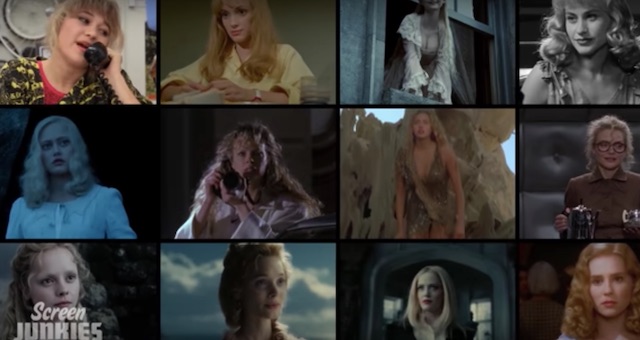 Honest Trailers has my back. How do you go about being the protagonist in a Tim Burton movie? “Fall in love with an ethereal blonde and finally overcome their terrible parents, all while dealing with an antagonist that’s probably wealthy, overweight, or both.”

Perhaps the most on-point observation of all: “Journey into the mind of a director who’s constantly journeying into his own mind.”

While the trailer also rightfully highlights many of Burton’s cinematic accomplishments and contributions, this further leaves you scratching your head over, well (to start):

The trailer asks another incredibly pressing question: what is it about Tim Burton and mouths? I’d skip over that segment if you have any kind of odontophobia. Speaking of which, I am upset at this reminder that Charlie and the Chocolate Factory exists and shall henceforth go back to pretending it never happened.

What do you think of Honest Trailers’ take? What are your favorite—and least favorite—Tim Burton movies?