Most Roger Klotz Cackles From Doug Are The Same Sound 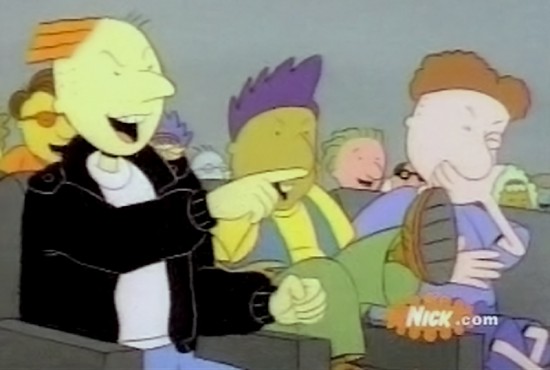 Rugrats proved to be quite successful. The adventures of the show’s inexplicably loquacious infants spanned nine seasons, launched two spinoffs and three feature films. Likewise, Ren and Stimpy‘s often crude and outlandish toilet humor helped cement its status as a cult classic for adults and children alike. But the third show, Doug, didn’t manage to make quite as big a mark on the hallowed halls of animation history.

Doug had a fairly good run, airing on Nickelodeon for four seasons before Disney scooped it up for three more on ABC. Reruns of the first four seasons played on Nick for about a decade, and I’m proud to admit that I spent a significant portion of my childhood watching them.

In retrospect, there were a lot of things about the show that didn’t make complete sense. For instance, the majority of the final Nick episode (“Doug Graduates”) revolved around the fact that nobody had ever seen what the school’s principal looked like, despite the fact that in the second episode (“Doug Gets Busted”) Doug was given a science fair award by the very same mysterious man. And don’t get me started on Bluffington School, a seemingly small-town elementary school whose facilities rivaled those of almost every college I’ve ever visited.

Minor continuity problems aside, there was always one aspect of the show that jumped out at me, even when I was a kid: Roger Klotz’s evil, almost maniacal cackle of a laugh. For some reason, one of my strongest childhood memories of the show was that laugh. Even today, as I aimlessly stumble deeper into my adulthood, that laugh hangs in my mind with stunning clarity. I hadn’t seen the show in years, and yet I still remembered that laugh. Why was that?

On a whim, and in a textbook display of time mismanagement, I sat and watched all four Nickelodeon seasons over the course of a few days. About halfway through the second season, it became apparent why the laugh had been stuck in my head all these years — the recording of the laugh was reused over and over in many of the episodes!

The laugh in question (roughly transcribed as “nuh-hah, hih-ha-ha-ha-ha-HAAAAAAAAA-ha-ha-ha!”) occurs 17 times in 11 different episodes spanning all four Nickelodeon seasons, but the highest frequency is during season two. At times, the laugh occurs at the exact same time Roger is delivering another line of dialogue, almost as if another character in his group was the one generating the laugh.

Can this phenomenon be explained? Well, lacking any input from the staff that actually made these shows, all we can do is speculate. Perhaps it was intended to serve as a catchphrase, like Mr. Dink’s claim that everything he owned was “very expensive.” Maybe it was an in-joke for the sound department, a sort of small-scale Wilhelm Scream for the show. Or perhaps the venerable Billy West (who voiced Roger, Doug, and a slew of other characters that I guarantee you’ve heard of) wasn’t able to repeat that magical laugh when future scripts called for it, resulting in the need to re-use the recording. Maybe the productions were under a tight deadline, and this was the quickest/easiest way to get the episodes out the door quickly. For now, the mystery remains unanswered, and we can only guess.

Well, that, and edit videos about it.