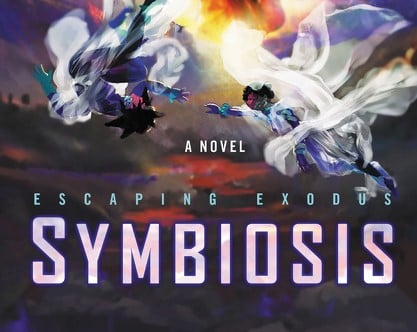 When it comes to books, a genre that I look forward to each year is sci-fi. The releases never fail to transport me to a realm of memorable adventure, imaginative worlds—and really damn good writing. This year, Nicky Drayden is gearing up to deliver yet another new favorite book to my shelf with her sequel, Escaping Exodus: Symbiosis.

Her first novel in the series introduced us to Seske Kaleigh, “the heir to a biological, city-size starship carved up from the insides of a spacefaring beast.” When the delicate system of balance she and her clan have maintained for centuries gets unexpectedly interrupted, she finds herself on a journey of discovery that is truly unforgettable.

And today, The Mary Sue is delighted to share an exclusive excerpt from Escaping Exodus: Symbiosis, that picks up Seske’s story and hints at even more immersive adventures to come. Enjoy!

Darkness creeps up behind us as Adalla and I venture farther into the abandoned heart fissure. Ichor-slickened flesh presses all around me, as if I’m sealed in a womb. Or a tomb. I
keep one hand on Adalla’s shoulder and keep my eyes trained on the half-dimmed light she holds out in front of her, even though it fails to illuminate anything beyond her next step.

“I’m not sure about this,” I whisper to Adalla. If we get caught here, we could get into so much trouble. Adalla should know that more than anyone. Even after she’d single-handedly saved our Zenzee’s massive heart from failing three years ago now, it’d taken months and months and months before she was trusted anywhere near the organ again. She’s worked her way up to being indispensable now, and her knife skills are renowned . . . and I’m proud of that, I am. But really it just means that Adalla’s been in such high demand at work that she’s completely wiped by the time she comes home to me. Which is why I’m here, sneaking through this nauseating crawl space, hoping to steal back a little bit of her time and attention during her lunch break, despite the risks involved.

“Don’t be nervous,” she says, her gait sure and steady. “This section of the heart is closed off and repairs won’t begin until tomorrow. It’s safe, betcha. Just you and me.”

I wish I shared her confidence, but the anticipation of the bone-rattling heartbeat keeps me from fully appreciating the mischief we’re about to get into. I’m mindful of where I tread, stepping over the bulging capillaries threatening to trip me and avoiding the trickles of phosphorescent ooze meandering down the walls. Finally, the fissure opens into a small chamber the size of our bedroom. The warmth here is a welcome change from the chilly temperatures we pretend we’ve gotten used to since our near exodus. This is far from being the perfect getaway, but it’s cozy and quiet, and most important, private. However, as we venture farther inside, I hear a panicked squeal from somewhere in the shadows—something startled by our presence.

“Oh no,” Adalla says, shoving her lamp at me, as if I’m not already burdened by the load of our neatly packed lunches. She moves slowly in the direction of the noise. “The heart murmurs were supposed to be relocated. They must have missed one. Let me just—”

I sigh. Loudly. Even on her break, Adalla can’t tear herself from her work.

“You know, it’s fine. It’s fine. I’ll let someone know about it when I get back . . .” She points to the mound of dry flesh in the middle of the room—a little island that rises above the ichor-drenched floor. “This seems like as good a place as any.”

The long, wavering shadows the lamp casts upon Adalla’s face are both beautiful and mysterious. A wry smile plays at her lips. My defenses fall, and suddenly I’m a giddy mess, bumbling all over the place, laying out our blanket and the special feast I prepared. I can hardly keep the saliva in my mouth. There’re the teal eggs I’ve been fermenting for over a month. Spicy cheese balls, whose secret family recipe was gifted to us by Adalla’s tin uncle on our first wedding anniversary. Battered woodlice I’d spent all morning deveining, plucking away at least a thousand little legs. All her favorites. Adalla looks at me as though she’s ravenous, but her eyes have yet to even flick in the direction of the food. I flush at that look and hold up the cheese, almost like a shield, intending to ask if she wants the honor of shucking the thorns off the first piece, but before I can speak a word, her mouth is upon mine.

I topple over at the force she comes at me with, kicking the plate of woodlice over too, but on the next breath, all those other cravings fade into the back of my mind. All I can taste is Adalla. The ichor splashes as we roll back down the hill into a shallow puddle. Adalla’s body is tense beneath mine, a well-tuned muscle that has saved our entire people on more than one occasion: firm biceps, rippled abs, thighs that could launch a ship into space if they wanted. And yet when I trace my finger along her collarbone, then down, tugging at the neckline of her heartworker’s dress, she practically becomes the puddle she’s lying in. What does that make me, the sole person who knows exactly how to cause all that tension to melt away? Powerful. Confident. Adept.

I leave no part of her unexplored, untasted, unloved. The heart shudders as Adalla does the same, though I am unable to determine which tremor is stronger. It is an unfair comparison, anyway—the heart merely an organ and Adalla’s body my whole world. I realize that maybe I am good at working to the beat, too, deepening into our connection until I find the perfect tempo. Each and every three minutes and forty-seven and a half seconds that come and go bring more quakes and shivers. And then finally, we lie in each other’s arms, comforted in a nest of ichor-soaked petticoats and moss shawls, nothing of our special meal salvageable. Our hunger, however, has been more than satiated.

“Daide’s bells,” I say, struggling to catch my breath.

Adalla looks at me, grin so sloppy on her face it nearly sits sideways. “That was—”

“Perfect, I was going to say. You’ve really got a bad habit of putting words in my—”

I press my mouth against hers, and in an instant, she’s a puddle again. My heart knocks hard, as if it’s trying to break through my ribs. Pounds hard against my eardrums, I think they’re going to rupture. Today marks three years. Three years to the day since we kissed in zero gee, and unlike our wedding anniversary, it’s a date that Adalla and I share alone.

I smile at that, the thought of us being alone. No sudden intrusions by a nosey head-wife who “forgot” to knock or the bickering of our heart-wives during dinner. No slobbery kisses shared between our head-husbands who enjoy flaunting their affection a little too much. And it’s nice to escape the general annoyance of knowing that we’re all breathing one another’s air. Frustration curls my toes, and I tamp it back down like I usually do, but I’m left wondering if agreeing to remain in this marriage had been a mistake.

The annulment proceedings hadn’t gone as we’d hoped. Or at least how Doka had hoped. The Senate had been too eager to strip away his power, salivating at the promise of annulling his position as Matris as well if we would have pressed through with dissolving the marriage. They didn’t care if his policies and quick thinking had saved us from ourselves. They just saw the threat his manhood posed to the centuries-old Matriarchy, which deserved to crumble as far as I was concerned. And I was willing to let it. But something broke in Doka’s eyes when they read their ruling, and I . . .

I couldn’t let them take away his hopes and dreams like that.

I’d interrupted the annulment right before the decision was made final. I’ve never seen eyes cut so hard as those of the Senators in that room, and I can still feel that coldness arching through my spine, even years removed from it. It took time, but after hours of arguing, we came to a solution that would work for everyone . . . well, at least one that angered everyone equally: Doka and I would remain married in title alone, him retaining the position of head-husband in our family unit, and me moving to the position of will-wife, and as such, no romantic relationship could ever exist between us. He’d be free to marry according to his heart, as would I. A laugh at how naïve we’d been to believe such a thing was actually possible for us, but I got to marry Adalla and Doka got to keep the crown, and in exchange, the Senate asked for a diminished capacity for his role as Matriarch, their first power grab of many. It wasn’t ideal, but then again, nothing about life aboard the Parados I has ever been ideal since our people abandoned Earth.