Yom Kippur Begins Tonight, So Atone For Your Sins With the eScapegoat

It's okay to slaughter a goat if it's not actually real, right? 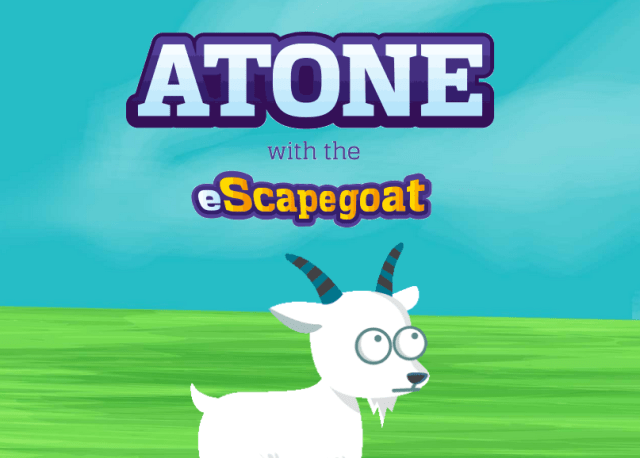 Did you guys know that the word “scapegoat” comes from the ancient Hebrew tradition of transferring your sins to a goat and then sacrificing it as an offering during the Day of Atonement? That’s probably illegal now, so if you want to celebrate Yom Kippur right, you should probably transfer your sins to this fictional Internet goat instead.

Created by the crew at G-dcast, a media company devoted to “raising basic Jewish literacy,” the eScapegoat is a way to anonymously admit to wrongdoing. So it’s sort of like Postsecret only you don’t have to exert as much effort, and if you’re a religious type of person you can feel a little better about yourself after confessing a sin. You don’t even have to be Jewish to use it, though a good portion of the sins that show up on the site and on the @Sinfulgoat Twitter (because of course you’d put the best ones up on social media) are about transgressions that relate to Judaism.

Had an affair with a rabbi as all I really want is for everyone to find out. http://t.co/FtkjW4e4A4

I am often too short with my son – I hope to be a less angry-sounding father in 5774.

Though not all of them, of course.

I care more about fictional TV show characters than I care about most actual people I deal with on a daily basis.

I am 48 years old, a single woman with no family. I don’t want to be old. The only thing keeping me alive is my cat.

Woof. Those hit close to home.

“Our hope is that we not only got you to laugh, but also helped you push your own goat towards the desert,” the creators of eScapegoat say. “Or rather, encouraged you to work on offloading your sins.”