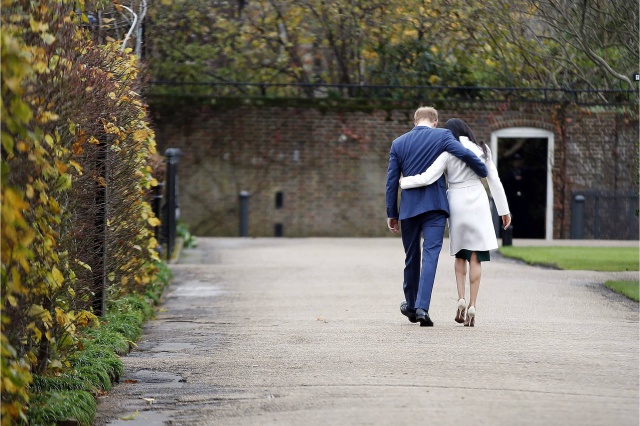 [Updated: Thank you for addressing the error. It has been corrected-P]

Even as a self-described Anglophile, beyond my very intense watching (and rewatching) of Netflix’s The Crown, my royal family feels are lukewarm. Other than the late Diana, Princess of Wales, I have not heavily followed the current royals. Yet when the news broke today about Prince Harry and Meghan Markle’s engagement, I was for lack of a better word, shook. No matter what you feel about the royal family—and there are a lot of opinions that are valid on both sides—the significance of Prince Harry being engaged to a divorced, mixed-race African-American woman, post-Brexit, is hella big news.

Divorce and the crown have a messy history. Starting with perhaps the most famous split in history, when Henry VIII created the Church of England in the 16th-century in order to separate from the papacy and obtain a divorce from Katherine of Aragon to marry Anne Boleyn. It was the divorce that changed the political landscape of Europe and had huge ramification for England—and who was permitted to marry into royalty. Then came the Royal Marriages Act 1772.

The Royal Marriage Act of 1772 was passed by Parliament to ensure that the royal family could only marry people that would preserve the crown’s status. In other words: other royal/rich people with no weird baggage (at least visible baggage; we could talk about the strange things the royals got up to for a thousand years and not stop talking). The act came to pass because George III was extremely bitter about his younger brothers being able to marry the women they wanted (one a widow, and one an illegitimate daughter) and he was stuck being wed to Charlotte of Mecklenburg-Strelitz. Charlotte was German, too dark for his liking, and considered ugly. If you look at her picture, it’s clear that she was “ugly” the way Anne of Cleves was “ugly”: she was just too foreign. They eventually had a pretty successful marriage despite his health issues, but like all petty people, George felt the need to ensure that if he had to marry for duty, so did everyone else.

According to the act, a potential spouse of a member of the royal family had to be approved by the Crown, and but as we saw on The Crown, any member of the Royal Family over the age of 25 who did not get the Crown’s consent could marry one year after giving notice to the Privy Council of their intention so to marry.

Okay, new petty marriage law, but everything was going well, and when kings couldn’t marry who they wanted, they just got mistresses and dealt with the drama. However, all that got blown up significantly with Edward VIII and Wallis Simpson. Wallis Simpson was married and the mistress/girlfriend to Edward VIII when he was the Prince of Wales. However, when George V died and “David” (as he was called by family) became Edward VIII, it became a problem when he wanted to marry his mistress, Simpson. As a result, he ended up abdicating the throne, and his younger brother George VI became the King, and George’s daughter Elizabeth II became Princess of Wales. The objections the Royals had of Wallis was that she was American, a divorcee (and about to be getting a second divorce at the time they were together), and seen as a social climber unfit to be Queen consort.

The abdication, while retrospectively was a blessing—at the time and in the generation following (there are arguments that Edward and Simpson were Nazi sympathizers)—it created a panic within the Crown to ensure its stability in the modern age. However, it was always confusing as to what that stability meant ,and whether in a modern monarchy, the old ways were necessary. Princess Margaret, Elizabeth II’s sister, dealt with that post-Abdication anixety the most in her early life, when she was denied being able to marry the divorced Peter Townsend. She eventually married Antony Armstrong-Jones, a photographer, in what ended up being the first televised royal marriage. Princess Margaret later got divorced after the huge scandal of having an affair with a younger man, and her divorce led to her living a heavily stigmatized life until her death; “members of parliament branded her a “royal parasite.”

While Princess Margaret had to deal with the social ramifications of her divorce (she was the first royal divorce since Princess Victoria in 1901, who remarried Grand Duke Kirill Vladimirovich and got exiled from Russia for it—but that’s another story) what it did do was normalize royal divorce for her family. Since Margaret, three of Elizabeth II’s four children have gotten divorced: Prince Charles and Diana, Princess Anne and Mark Phillips, and Prince Andrew and Sarah “Fergie” Ferguson. Only Prince Edward is still married to his wife, Sophie Helen Rhys-Jones.

What this mini-history lesson is all here to say is that marrying into the Royal Family is not easy, and it is especially not easy when you are not deemed “acceptable—and there are plenty of ways Markle could have been seen that way by the Crown. She is divorced and American, and she is also a black woman. In a post-Brexit world where nationalism is on the rise across most of Europe and racial difference has been at the forefront of conversation, this is a big deal.

Media in Britain has taken some cheap shots against Markle in the past. A headline that caused a lot of attention was one by Mailonline.com that read: “Harry’s girl is (almost) straight outta Compton.” Harry even came forward with a statement concerning the press’s treatment of Markle, condemning the underlying racist behavior.

Regardless of what anyone might feel, this match is another way that the Royal family has entered the 21st century (Prince William’s marriage to “commoner” Kate Middleton was also a considerable evolution). Interracial couples are commonplace now, and considering the imperial history of Great Britain, that is no surprise. According to the Office for National Statistics, the rate of mixed relationships has increased in the last few years, with one in 10 people being in them at the last census.

Now, this engagement is not a fix for racism or the coming of a new era, but it does signal a change, and it’s a significant and highly visible one. The Crown may be symbolic in many ways, but it is an important symbol in the U.K. and worldwide. Their embrace of Markle is an important gesture in a time where racial divisions are high.

I’m already waiting for the Obamas to be invited to the wedding and the Trump invite to get lost in the mail.