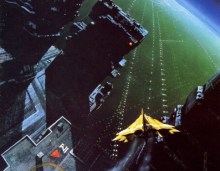 Chances are your opinion on whether anyone should make a game out of Ender’s Game is either yes or no.  Do, or do not, there is no try.

(Unless of course, you haven’t read the book, in which case you get a look of disapproval and are excused from reading the rest of this post.)

Well, you may be happy or sad appropriately at the news that the Ender’s Game game is not happening… again.

The folks currently with the wherewithal to bring Orson Scott Card‘s bestseller to pixels were Chair Entertainment, who got the rights two years ago.  They were acquired by Epic Games at roughly the same time, and now their co-founder admits that while their initial designs were good,

Epic’s primary objectives is to create original and unique franchises. I don’t know that Ender’s Game fits into that strategic objective anymore.

Certainly, regardless of your opinion, if one simply considers the nature of our consumer society, it is amazing that Ender’s Game has not previously received a video game (or movie!) adaptation, especially when one considers that the book (published in 1985) features an RPG as a primary plot point, an arcade as a minor plot point, and the rest of the action is spent in zero gravity dog fights and zero gravity competitive team sports.

What could be keeping the project from coming to fruition?  Is it the child soldiers?  The genocide?  The naked shower brawls between minors?  Come on, Dune basically had two of those three and we still got a trip-tastic movie out of it.