Oh Wow, Everyone Sure Does Hate The Emoji Movie 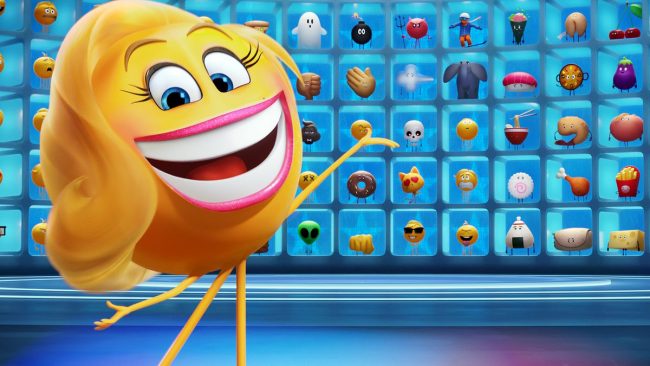 Good news, everybody! The Emoji Movie is out in theaters today! Now, apologies if you’re planning on seeing this–especially if that’s not your decision, but maybe that of a small child who can’t be expected to know any better. For you, this is probably not great news. It’s probably very, very bad news. But for the rest of us, The Emoji Movie’s opening means we get to roll around in a whole mess of deliciously scathing reviews.

As of writing this, this movie has debuted with a remarkable 0% rating on Rotten Tomatoes. ZERO. It currently has a 46% audience rating, although a quick scroll through those reviews have people saying this movie “changed [them] for the better,” is “the best movie of all time,” and making comparisons between its bad reviews and doubters of Jesus, so I’m thinking they might be a tad disingenuous.

[ETA: There had to be one! Just as I was wrapping this up, a positive review popped up on Rotten Tomatoes and it’s now at 3%. Common Sense Media says “The Emoji Movie isn’t bad, but it isn’t great, either. It’s ‘meh.'” High praise!]

The premise of The Emoji Movie sounds like someone took the idea behind Toy Story–what if our inanimate objects had a secret life when we weren’t around?–and applied it to circumstances no one could possibly care about: our apps. Here’s what critics are saying about what sounds to be a terrible premise and worse execution. I’ve included the headlines because they are beautiful.

NY Daily News: ‘The Emoji Movie’ is a big steaming zero-star pile of 💩

The only thing worse than the dialogue is the absurd product placement. In addition to “riding the Spotify streams” to make it all the way across the phones, there are a few glimpses hawking Crackle, a streaming service no one uses but just so happens to be owned by the same corporate entity that is distributing the film.

The Guardian: A big thumbs down 👎

Children should not be allowed to watch The Emoji Movie.

The A.V. Club: The Emoji Movie is Inside Out crossed with a Sony commercial and dunked in toxic ooze

There was probably never going to be a version of this film that would prove even remotely plausible as a movie someone felt passionately about making for artistic reasons.

The failure of imagination in “The Emoji Movie” is not limited to its depiction of the app world. This is a film that has literally nothing to offer viewers—there are no moments of humor, excitement or insight regarding a culture that considers emojis to be the pinnacle of contemporary communication.

For a long time, Hollywood has been propagating the idea that the panderingly, trendily idiotic can be made to seem less so, by polishing it up with bright shiny gloss and enlisting engaging talented performers and writers. I can’t be entirely certain of this, but I would say “The Emoji Movie” takes this notion to the outer limits of credibility.

LA Times: ‘The Emoji Movie’ can be summed up in one word: Meh

Perhaps we should just throw our smartphones into the sea and let the waves take us now.

Vox: Do Not See The Emoji Movie

Still, as a critic, you walk into every movie — even the ones you’re pretty sure are going to stink up the joint — with a sense of hope and willingness to be amazed. And The Emoji Movie, friends, is certainly amazing.

It’s amazing that we can put a man on the moon but movies like this still somehow get made. It’s amazing that with all that partner money, Sony couldn’t pay for a better script, with better lines of humorous dialogue to be delivered by the emojis than, “Throw some sauce on that dance burrito!”

It’s amazing — or maybe it isn’t — that in addition to its poorly conceived Handmaid’s Tale stunt, the filmmakers saw fit to have a character sing, “Nobody knows the touch screens I’ve seen / Nobody knows the screenshots,” while sitting atop a pile of trash, to the tune of “Nobody Knows the Trouble I’ve Seen,” a spiritual written by slaves to bolster their spirits while toiling in the pre-Emancipation American South.

Vulture: The Emoji Movie Will Send You Into a Spiral Emoji of Despair

Not once does this film rise above the level of humor of literally any real-world use of a simple upside-down-face emoji (whose meaning I tend to translate as “Wheeee, life is a horrible hall of mirrors and I am powerless to do anything but smile about it.”)

If only my review of this film could be an upside-down-face emoji.

The Wrap: There Are No Words

The one non-dispiriting aspect of the “Emoji Movie” experience was getting to see “Puppy!”, a new animated short set in the world of “Hotel Transylvania.” When Adam Sandler outclasses your high-concept, high-tech functions, it’s time to switch to a flip phone.

Pajiba: Look, I Think We Can All Acknowledge That Society Is Crumbling

James Corden, as Gene’s sidekick High Five, makes me want to somehow punch a hole through my own body. TJ Miller is irritating. You know that. You expected it. James Corden is somehow more irritating, the result of him playing the whiny, self-absorbed comic relief character against Miller’s relatively (relatively) more subdued Gene. Cordon says “Bye, Felicia” and “Oh, snap!” I don’t need that. No one does.

Indiewire: ‘The Emoji Movie’ Is Almost as Bad and Brutally Depressing as Everything Else in 2017

Make no mistake, “The Emoji Movie” is very, very, very bad (we’re talking about a hyperactive piece of corporate propaganda in which Spotify saves the world and Sir Patrick Stewart voices a living turd), but real life is just too hard to compete with right now. Not even a gaudy monument to late capitalism that masquerades as children’s entertainment — a film that bends over backwards to teach your kids that true happiness is always just an app away — can measure up to what’s happening off-screen. Not even a witless cartoon that unfolds like a PG-rated remake of “They Live” as told from the aliens’ POV feels as toxic as glancing at your Twitter feed or (God forbid) turning on the television news.