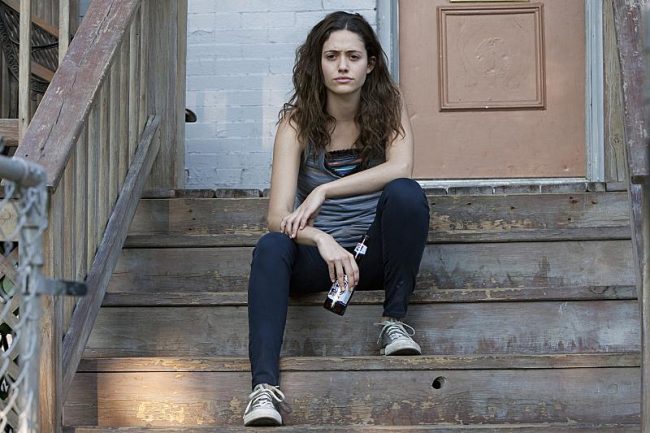 [UPDATED 12/9/16 at 7:41PM ET: The headline and second paragraph have been corrected to make clear that Showtime’s Shameless has not actually been renewed for an eighth season yet, and therefore, is not currently in production.]

It’s thrilling to watch as more and more women in Hollywood are standing up to gender inequality in all forms, from hiring to the wage gap. The latest of these is Shameless‘ Emmy Rossum, who’s in a unique and privileged position to set an important precedent.

Shameless has finished its seventh season and is waiting on renewal for Season Eight.  Rossum stars on the show alongside William H. Macy, who plays the alcoholic, single patriarch of the Gallagher family, Frank. Rossum’s Fiona, by default as the eldest child, has to step up into the matriarch role and ensure the well-being of her five siblings and the family household. She is often the focal point of the series, and appears in every episode. And yet Macy, because of his extensive film career and awards, has always been paid more. Right now, Rossum is fighting not only for wage equality between her and Macy, but to be paid more per episode than Macy now to retroactively make up for all the seasons she was paid much less than him for doing equal work on the show.

This is the fascinating thing about Hollywood and the entertainment industry, specifically when it comes to actors. It’s one of the few industries where you can have two people doing the exact same job, at the same level (and with the same title), and blatantly pay them completely differently, simply based on things like past accolades and, you know, being alive longer. And also, being a dude.

I completely understand Macy (and his representation – they’re the ones making the deals) not doing the show until a certain number is reached, because he does add value to the show in the form of cache and potential viewership. People know him, and are likely watching the show because of him. All that is very well and good. But if Rossum is the other lead on the show, she should get whatever number Macy gets if she’s pulling the same hours has similar screen time, and is equally important to the storytelling (i.e., the show can’t be done the same way without her).

According to The Hollywood Reporter, “Unlike in the British series on which the drama from producer John Wells is based, Fiona plays a key role in every episode. The U.K. Fiona (Anne-Marie Duff) only has appeared as a regular in seasons one and two and recurred in season 11. (The U.K. Frank, played by David Threlfall, has been a regular in all 11 seasons.)” Whereas Fiona wasn’t originally intended to be as much of a lead as she is in the U.S. version, the fact remains that she is, and has been for eight seasons.

THR also reports that “Sources say if Rossum closes her deal, producer WBTV then will renegotiate with the remainder of the cast, including Jeremy Allen White (Lip), Cameron Monaghan (Ian) and Steve Howey (Kevin). If she can’t close a deal, Showtime could choose to renew the show without her or cancel it.”

Well, it would certainly be a shame if Showtime cancelled the show, as it has a loyal fanbase. However, if they close the deal with Rossum, I don’t see why they would need to renegotiate with the rest of the cast. The rest of the cast is not billed the same way that Macy and Rossum are, and none of them seem to be demanding more money. Why is it that, after an actress demands a salary increase, everyone needs to get one, but when men are getting paid more than women, that’s totally fine and par for the course?

The entire point is that, if she’s holding up the show along with Macy, she should be paid equally for the level at which she is working (and yes, be back-paid if she’s been underpaid in years past). I hope that Rossum wins this important victory, and I hope that her castmates are standing behind her in solidarity with gender parity in the industry. If Macy really wants to exercise his clout, he should be speaking to Warner Bros. Television on her behalf, reminding them that he could always walk, too.