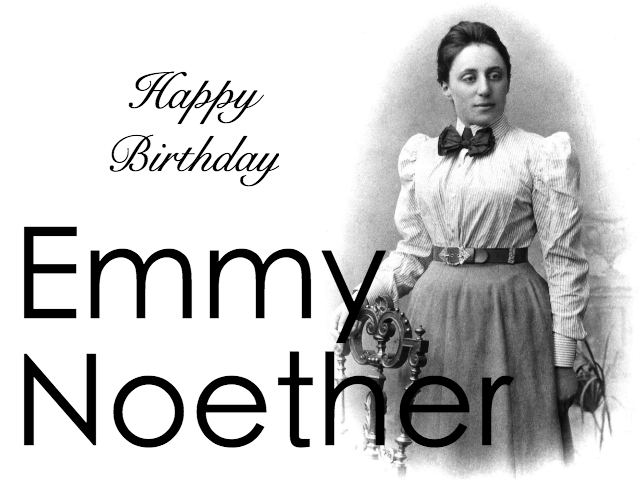 See this BAMF right here? Do you see her and her amazing fashionable bowtie? This is Emmy Noether, and you better remember that name because she is the most kick-ass mathematician ever and YOU ARE WELCOME.

Do you think I am exaggerating? Oh let’s just ask genius mathematicians Pavel Alexandrov, Jean Dieudonne, Hermann Weyl, Norbert Wiener, and ALBERT EINSTEIN and, oh look, they all say she’s the MOST IMPORTANT WOMAN IN THE HISTORY OF DOING MATH, so, pretty sure I’m not wrong.

Emmy was born to mathematician Max Noether (which is pronounced “nerder,” making her way cooler than originally anticipated) in 1882, when women were not typically encouraged to do things that didn’t involve embroidery or the kitchen. After studying math at a German university, Emmy completed her dissertation in 1907 (she would later call her thesis “crap,” because she is One Of Us); but you think math dudes were cool with that? OBV NO they weren’t – are you paying attention to, like, all of history? – so they made Emmy work at the university while paying her LITERALLY ZERO DOLLARS for SEVEN WHOLE YEARS. I barely got through a month-long unpaid internship and Emmy lasted seven years while surrounded by German math trolls? Every award to her.

In 1915, Emmy was invited to join another German university as a lecturer but – surprise! – more math dudes were like “Nope,” and they made her lecture for FOUR MORE YEARS under her male supervisor’s name. ARE YOU GETTING JUST HOW GOOD EMMY WAS AT MATH? Most of us struggled to survive twelfth-grade calculus without having at least one meltdown, while this lady is like “I will math for free and feel humiliated the whole time but that’s how much I love math you guys don’t even worry about it.” Emmy’s supervisor was ahead of his time and didn’t understand why his math bros were so against Emmy, saying “We are a university, not a bath house”; Emmy, taking this as a challenge, then started swimming at a MEN-ONLY POOL because she was a stone-cold bad-ass.

Emmy was finally allowed to start lecturing under her own banner in 1919, and everyone across the whole entire world was suddenly like “Damn this girl is really frickin’ sweet at math, whoa.” Around this time, she did some important calculus – like SUPER important calculus. So important, in fact, that “Noether’s theorem” is now considered one of “the most important mathematical theorems ever” and is basically as vital as EINSTEIN’S THEORY OF RELATIVITY which you may have heard of, I don’t know. It explains why bicycles work, so you can thank Emmy the next time you get on your sweet, sweet ride. Also, objects that meet the qualifications of one of Emmy’s other theories are now called “Noetherian,” and by 1933, people were calling her students the “Noether boys,” because they basically osmosis’d her radness and became math geniuses by association.

Oh hey L O L did I forget to mention that Noether was Jewish in Germany and this is the 1930s? Yeah oops HOW COULD I FORGET THAT TINY LITTLE DETAIL? Silly me. When the Nazis (the damn NAZIS, guys; this lady, SERIOUSLY) decided Jews weren’t going to be allowed in universities anymore, Noether peaced the hell out to America, presumably because there were way fewer Nazis in Pennsylvania. She never married, hated housework, wore glasses, had a lisp, and is almost always seen smiling in photos. One time, two of her (rare) female students came up to her during a lecture break to be like “Hey, we notice you get so excited about math that your hair gets really frizzy and you spit food on your clothes,” but you know what? They couldn’t even talk to Emmy, because she was too busy having a discussion with some other students about MORE MATH. So maybe, the next time you’re feeling down, just think WWED? If she can laugh through NAZIS and HORRIBLE ASSHOLES you can handle whatever it is you are going through, I guarantee it.

Because being a woman is awesome but mostly terrible in every era, Noether had surgery on an ovarian cyst in 1935 and died four days later at age 53. Know who wrote her eulogy? And published it? In the New York Times? Albert Einstein. YEAH. Yeah. Now, she has a crater on the moon AND AN ASTEROID named after her. So thanks, Emmy, for being a math genius and inspiring ladies to get it. And happy birthday.