The Good, The Bad, and The Emmys: What You Missed At Last Night’s Awards Show

There was sadly no Beyoncé, so the VMAs win by default. 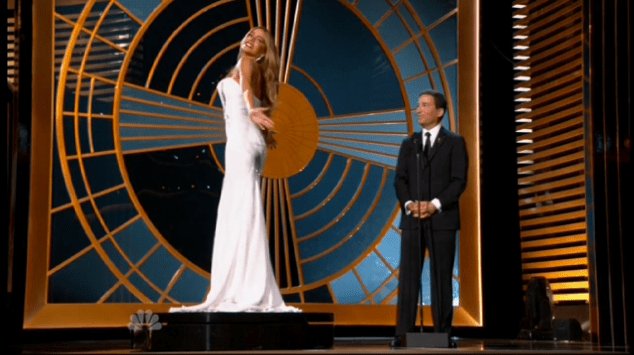 The Emmy Awards were on a Monday for the first time since 1976, but somehow it managed to score its second highest-ratings in eight years. Take that, Under the Dome fans! If you were off busy doing other things like having a life and not caring about television, please tell us how you’ve been able to accomplish this feat. ALSO, here are the big events you missed so you won’t feel left out when everyone’s talking about them. You’re welcome!

We’re all still mourning the sudden loss of Robin Williams, so it wasn’t a surprise that the Emmys would offer up their own tribute to the beloved performer. Billy Crystal got on stage to talk about their friendship and Williams’ talent and energy, comparing him to a faraway dead star whose light can still reach us.  Jesus, heartwarming science metaphors? You know right where we live, Crystal.

On a lighter note, Weird Al Yankovic also performed a medley of lyrics set to popular television show themes. The Game of Thrones bit at the end is particularly inspired—though I do feel bad for George R.R. Martin. He’s writing as fast as he can, guys! He’s allowed to leave his house once in a while! Finish at your own pace, George! Believe in yourself!

Fnally, best show of all time Billy on the Street did its typical “run around and ask people pop culture questions” shtick with Billy Eichner and Seth Myers. It was no “It’s Spock, Do You Care?”, but it remained the highlight of the night nonetheless.

Of course, it wouldn’t be a network television-produced awards ceremony without a little ol’ school sexual objectification, and this year did not disappoint—or rather, it did, but in a way that we more or less expect every year because sexism!

Bruce Rosenbaum, Chairman of the Academy of Television Arts and Sciences, gave his annual boring speech about the state of the industry. This year he especially pretended to care about diversity and made a tired joke about “always giving the viewer something compelling to watch.” Why was this a joke, you ask? Because next to him was a pedestal on which Modern Family’s Sofia Vergara slowly rotated like a glorified booth babe. “This is why I stopped doing car shows,” she said as she got off the platform, feigning dizziness.

Naturally this made a lot of people very angry and was widely regarded as a bad move, and feminist critics took the Awards to task on Twitter for promoting sexual objectification—but not for the incredibly stale joke, which also deserves a calling out. “Always giving the viewer something compelling to watch?” That is the “Cure for the Common Breakfast” of television jokes, NBC. This is why nobody watched Growing Up Fisher.

For her part, Vergara believes that critics are overreacting. “I think it’s absolutely the opposite [of sexism],” she told Entertainment Weekly. “It means that somebody can be hot and also be funny and make fun of herself. I think it’s ridiculous that somebody started this—I know who she was—who has no sense of humor [and should] lighten up a little bit.”

Of course, it is totally possibly to make fun of yourself without also buying into the idea that women are more compelling as eye-candy than they are as talented, capable people in their own right, but okay, Vergara—no one’s saying that you’re not hot and funny. At least it wasn’t “We Saw Your Boobs” bad, I guess. What do you guys think?

(via Deadline, TVLine, Gawker, US Magazine)