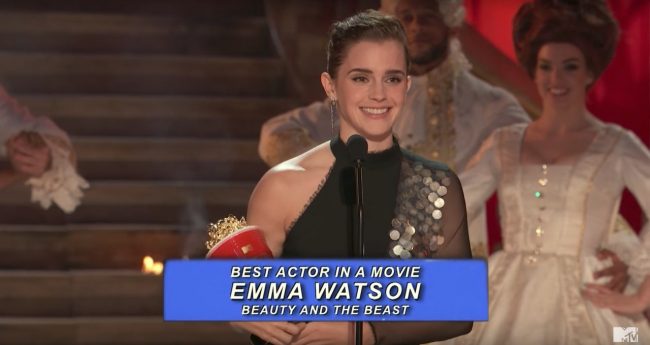 Historically speaking, film and television acting awards have always been separated by gender. MTV decided to buck that trend with this last iteration of the MTV Movie Awards, announcing that they would be awarding a “MTV Movie & TV Award for Best Actor in a Movie”. Emma Watson ended up taking home the historic first for her role in Beauty and the Beast.

In her speech, she acknowledged the importance of such a move by MTV, saying, “MTV’s move to create a genderless award for acting will mean something different to everyone. But to me, it indicates that acting is about the ability to put yourself in someone else’s shoes and that doesn’t need to be separated into two different categories.”

Especially important regarding the presentation of the award was who announced Watson as the winner: Asia Kate Dillon, who is the first gender non-binary identifying actor to have a role in a major television series (Billions, Orange Is The New Black). The importance of having Dillon present the award wasn’t lost on Watson either, as she said, “Empathy and the ability to use your imagination should have no limits. This is very meaningful for me, both to be winning the award and to be receiving it from you, Asia. Thank you for educating me in such an inclusive, patient, and loving way.”

It’s excellent to see that award go to someone who understands the importance of such a move. To many, the elimination of gender from the award doesn’t seem like a big deal, but to the many of millions of people who live outside of the gender binary, it’s actually everything. The strict dichotomization of gender is slowly fading away, and watching our entertainment follow suit is heartening.

Of course, with that being said, Hollywood has more than a few issues in dealing with representation in both film and television. Whether this change ends up sparking more change elsewhere remains yet to be seen, and please, forgive me if I strongly doubt that the Oscars will follow the tune of its upstart younger relative. That award show is as stuffy as it gets, and has—time and again—proven that it’s resistant to change and the evolving tastes of the film audience.

And I mean, don’t get me wrong: I’d like to see the Oscars acknowledge and accept this way of thinking about gender. Getting one of the most prestigious awards shows to eliminate gendered categories could go a long, long way towards helping people learn more and understand just why and how the gender binary is limiting. More than that, the removal of such a division promotes higher representation for the people who just plain don’t identify in one of two boxes. If you want to help spur change in an industry, that’s just one way you can do it, I think.