Interview: Author Emily V. Gordon on Finding Your Super You | The Mary Sue

Interview: Author Emily V. Gordon on Finding Your Super You and Taking Control of Who You Are

"I want us to start actively creating ourselves the way superheroes do, to realize that it's under our control. " 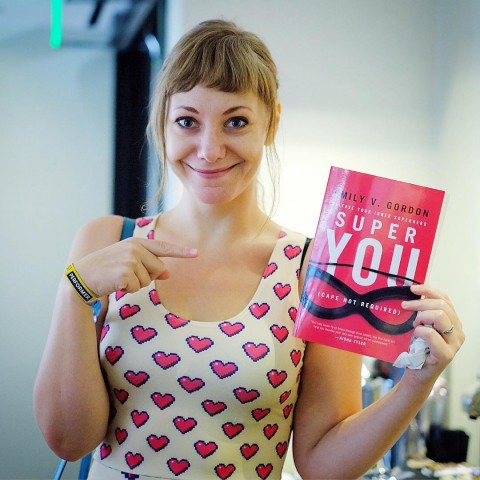 If you haven’t heard of author, producer, and brilliant advice-giver Emily V. Gordon, that’s all about to change. With the release of her new book Super You: Release Your Inner Superhero, Gordon examines the identity of the superhero and delves deep into comic book tropes to show us how they can be applied to our own lives on an everyday basis.

While the book has been touted as a self-improvement guide for women, she hopes the advice within Super You will be helpful for readers of all genders. “I think of this book as being strong enough for a woman, but made for everyone,” she says in the book’s introduction. Gordon spoke with The Mary Sue via email about the genesis of Super You, the appeal of superheroes in today’s world, and of course, which superpower she’d most like to possess.

The Mary Sue: What initially inspired you to write Super You?

Emily V. Gordon: I always wanted to write a book, and of the stuff I’ve written for other websites, the advice/mental health stuff always seemed to resonate the most. I ended up writing a bit of a love letter to myself at a younger age—stuff that I maybe wouldn’t have scoffed at as a younger woman.

TMS: I know you’re retired from being a therapist, but I think it’s great that you take the time to give advice to people who reach out to you on your Tumblr. Was the book sort of a natural extension of that?

Gordon: Yeah, a bit. I always knew that mental health was going to be part of my career in some capacity. I don’t think of being a therapist as a career, but as an identity. I’m always going to be the girl that strangers confide in through a bathroom stall or at a random dinner. And I like that. I like the idea that promoting emotional well being is part of my career.

TMS: What do you think it is about the superhero trope that makes it so applicable to our lives today?

Gordon: Well, I’m obsessed with origin stories … and superhero movies are too, especially these days. We are the product of the story we tell ourselves and other people. What I didn’t realize, and what a lot of us don’t realize, is that we get to take ownership over that story—we get to create it. Your origin story is not the story your parents told you, it’s not the story your first real boy/girlfriend told you, and it’s not the sum of all your failures—your origin story is a thing you get to actively create and adjust and believe and live up to. Superheroes realize that, but sometimes don’t. I want us to start actively creating ourselves the way superheroes do, to realize that it’s under our control.

TMS: Is there any superhero origin story you weren’t familiar with before you wrote Super You? Which character’s backstory is your favorite?

Gordon: I didn’t realize that She-Hulk, unlike Hulk, chooses to remain hulked out! I think that’s so cool. Not even Bruce Banner can handle that much emotion suffusing through him all the time! But she can, and she is a lawyer while being hulked out. That’s a lady who is in touch with her emotions!

TMS: Are there any parts of the superhero that we probably shouldn’t be looking to emulate?

Gordon: I talk about this in the book, but superheroes aren’t a perfect model of mental health, what with the double lives and all. I don’t want you to live a double life. I don’t like how comic books sometimes demonize or glorify or completely screw up how mental illness works. They can’t seem to handle dating and they have to be all secretive—a real life Super You has to be able to work on herself while living in the real world.

TMS: What are you consuming and enjoying right now as a fan in terms of books/movies/TV shows/video games?

Gordon: So much! I just saw an early screening of Crimson Peak and really loved it—it is sumptuous. No other word to describe it. I just finished reading Fates and Furies by Lauren Groff, and I loved the first Lenny Letter! I’m also playing a video game called Until Dawn where you essentially play several different characters in a horror movie.

TMS: If you could have any superpower, what would it be and why?

Gordon: I think I would love to have the power to gracefully end small talk conversations with strangers. I’m no good at it—I either make it weird or I keep the conversation going on way too long and soon we’re both crying about dead relatives we miss.

You can pick up a copy of Super You: Release Your Inner Superhero now wherever books are sold. (I’m already planning on gifting this book to everyone I know and love; it’s the perfect amount of geeky, compassionate and life-affirming.)