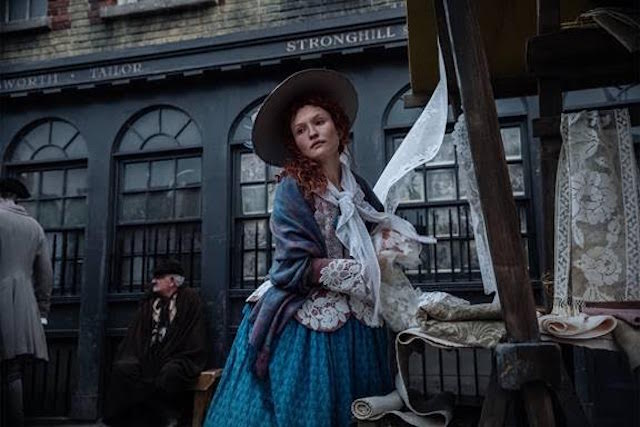 Emily Browning, who does an excellent job as “Dead Wife” Laura Moon, will be taking on an entirely different part in episode 7, “A Prayer for Mad Sweeney.”

Browning will play Essie Macgowan, a young Irish woman, and will likely be seen in a “Coming to America” story. In Neil Gaiman’s novel, Essie’s last name is Tregowan, and she’s s a thief sentenced to be transported to America as punishment for her crimes—and an ardent believer in leprechauns (in the clip below, she sets out a bowl of milk for them as an offering).

We assume that it’s Essie’s beliefs that bring Mad Sweeney (Pablo Schreiber) to America, and we’re keen to see the pair of actors and their top-notch chemistry interact on a whole other level. Having Browning play another figure in Mad Sweeney’s existence is a fascinating choice, considering his current antagonistic relationship with Laura. Sweeney is one of the more intriguing characters on the show, and I can’t wait to see more of his backstory.

American Gods co-creator and co-showrunner Bryan Fuller explained to Variety how the casting came about: “Essie was one of Michael and I’s favorite stories in the book. It’s essentially the tale of how Mad Sweeney made it to America. And we were talking about casting that role, and as we were in that conversation, Michael said, ‘Oh, we should just cast Emily in this role.’ And then we went to talk to Emily, and it was like, ‘So, the Essie episode’ — she was like, ‘Have you cast that actor yet? Because I think I should play her.’ And we were like, ‘Well, that just worked out well.’”

You can watch Laura as Essie in this clip from Sunday’s episode: