Journey Embargo Lifted, Everyone Loves It | The Mary Sue

The Embargo on Journey Lifted, Everyone Loves It 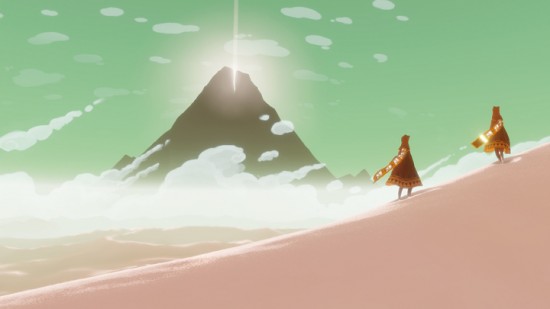 It pains me to be writing this post in such a way, but way back when, I didn’t make it into the Journey beta. This time around, I didn’t receive any sort of review copy or early release. So, while my likely fangasmic review will be coming sometime shortly after the official release date of March 13 and no matter how broke I am, I will have $14.99, that isn’t now, so we’ll have to check in on the rest of the Internet. They love it, if you’re wondering. Just how much, after the break.

It is 2012, and mostly everyone now knows that, while somewhat necessary, quantified review scores — be it numerical or symbolic — don’t really help. While Journey is pretty much tipping the scale with perfect scores and some slightly below perfect, what matters most are the words being used to describe the game. After all, if a basketball game gets a 10 out of 10, but you hate basketball games, that 10 out of 10 doesn’t accurately describe how good you’ll find the game. This brings us to Eurogamer’s review. If you’re wondering, Eurogamer gave the game a 9 out of 10. The last sentence of the review ended like this:

The master stroke, as in all great myths, lies not with God, but with the human element.

Computer and Video Games called the game “an unmissable experience,” right in the title. Not because you literally can’t avoid it due to some kind of omnipresence, mind you. Ars Technica said the game was a “hauntingly beautiful art house film disguised as a game.” Don’t read the review though if you aren’t fond of plot spoilers, it seems to spoil the ending. Vox Games said “Journey should be experienced by everyone,” with “everyone” being a group in which you’re included. IGN said “the hours spent completing Journey will create memories that last for years,” and they’re talking about the good kind, not the traumatizing ones. Official PlayStation Magazine said, “This is a game about which I would change nothing.”

The Internet goes on and on about how good Journey is, and I’ll probably join in sometime fairly soon after March 13, considering the game’s reported two hour length. Stay tuned, and if you have a PlayStation 3, you should probably set $14.99 aside for another couple of weeks. Over the past few years, the video games I’ve been looking most forward to were Portal 2, Uncharted 3, and Journey. That either speaks to what Journey is supposed to be, or the height of my lunacy. Two weeks.