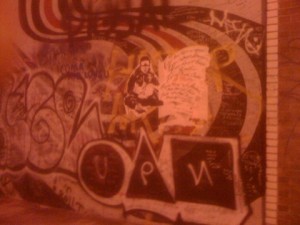 In the past few years, viral marketing has become a huge component of the advertising. As more and more people do anything they can to avoid traditional marketing, advertisers have been forced to come up with stranger and stranger ways to get potential buyers’ attention. When 20th Century Fox is paying someone to draw a 180 ft drawing of Homer Simpson out in a British field, you know the rules have changed. However, if the new name of the game is trying to be progressively more and more outrageous, it was inevitable that someone would go to far.

That’s just what happened in Los Angeles this past week as a fan-made memorial dedicated to the late singer Elliott Smith was defaced all in the name of selling tickets to an upcoming concert. Unsurprisingly, some people aren’t too thrilled.

Elliott Smith, of course, was a beloved singer-songwriter whose beautiful guitar and melancholy vocals brought him to prominence in the 90s. Despite the sad tone of much of his music, the music world was still shocked when Smith killed himself in 2003 at the age of 34. Heartbroken fans soon created an impromptu memorial at the LA location where one of Smith’s album covers was shot and it’s been maintained as a meeting place for his devotees ever since. Until this week, at least. The LA Weekly is reporting that the memorial has been defaced with a large quote from President Eisenhower. While it’s a lovely quote, it’s basically hallowed ground at this point and, when it became clear that the quote was merely a part of a viral marketing campaign that has nothing to do with Smith, people became enraged.

The strangest part of the story is who the culprit is. The viral marketing campaign is being funded by none other than Roger Waters, another music legend as the front man for a little band called Pink Floyd.