Ellen And Others Give Homeless Science Contest Hopeful A Backup Plan 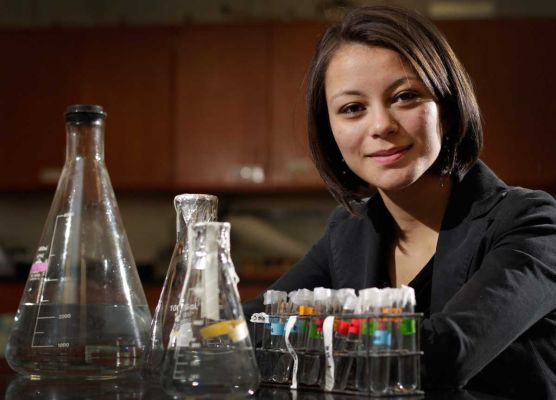 Eighteen-year-old Samantha Garvey put a lot of eggs in one basket when she applied for the Intel Science Talent Search. The winner of the contest will receive a $100,000 scholarship, something her and her family could desperately use considering they’ve been living in a homeless shelter for the last few years. The high school senior is currently at the semi-finalist stage in the talent search but her story has grabbed lots of media attention. As a result, she’s been given help from Ellen DeGeneres and others to make sure she succeeds.

While Garvey is waiting to hear whether her work studying the effects of predators on ribbed mussels is good enough to win the top prize, she’s been doing lots of interviews. She just taped an appearance on Ellen which will air today in which the host presented Garvey with a $50,000 scholarship.

DeGeneres said on the show, “I know you want to continue your education. You want to go to either Yale or Brown University. Well, we wanted to help you with that. So our friends at AT&T heard about your story and because of their commitment to the “Aspire” program to education. They want to help you achieve your dreams. So they are going to give you a $50,000 scholarship to go to the school of your choice.”

On Ellen, Garvey and her family also were given a $1,000 gift card to Whole Foods and $5,000 to J.C. Penney. The Associated Press reports that Garvey’s family has been offered a home by Long Island (her hometown) officials, which is now being renovated.

She’s also since been invited to President Obama’s State of the Union address by NY state representative Steve Israel, who had an extra ticket. “First, I want her to be an example of perseverance in the face of adversity,” he said. “But second, I think she will force everyone from the President to my colleagues to ask how it is that a middle-class family with a child who is a genius can fall into homelessness?”

Garvey will find out soon if she’s a finalist for the Intel prize, in which case she’ll be guaranteed a monetary award of some amount. It’s nice to see she’ll have a good head start either way.

Here’s her segment from Ellen.

(via Yahoo, photo by Chris Ware)