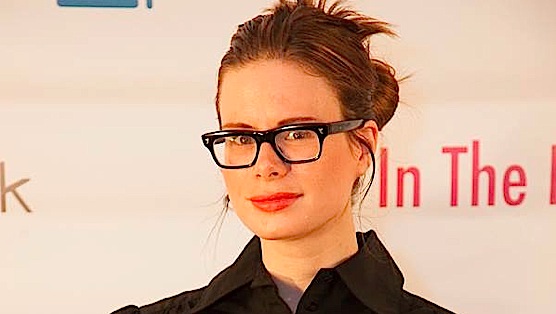 Elle Schneider is a filmmaker, writer, and cinematographer – and a huge advocate of getting more women into cinema. Schneider’s short action film Headshots (which also features a female cinematographer and costume designer) was just given the green light on Seed & Spark, so we sat down to talk with her about women in cinema, and how us regular folk can help advance the cause.

Sam Maggs (TMS): What drew you to cinematography and directing?

Schneider: I’ve always been interested in the visual and performing arts; my parents were very serious about my having a “well-rounded” artistic education, and I was always drawing or going to museums as a child. When I got older I started to buy disposable cameras with my allowance, so many that my parents couldn’t afford to process them all. I liked to shoot street scenes in New York, pushing myself to capture once-in-a-lifetime slices of life that weren’t staged or orchestrated in any way. As a cinematographer, I like to interact with the environment I’m in as much as possible, as I feel that focusing on the best that real life can provide creates more opportunities for creativity than what I can simply come up with in my head without seeing a location. This folds into my directing style as well; I like to work with actors as much as I like to tell stories; I like to figure out cool ways they can interact with each other physically and in the space they inhabit.

TMS: There are so few female cinematographers in the business. How do you think we can encourage more women to get into the field?

Schneider: We need to give more women cameras early, more frequently, and with less oversight. We need to give young women room to experiment and learn the way that many young men already do.

TMS: What do you think are the major barriers at the moment for women trying to get into the business?

Schneider: It’s generally agreed upon these days that there aren’t enough women in the film industry, but no one has come up with the perfect solution to fix the problem, so there are many groups and initiatives trying different approaches to breaking through, like the raptors testing the fences in Jurassic Park. My feeling is that as a culture we steer women away from the kind of film that studios make, and as a result there are very few women with the necessary ingredients on their resumes necessary to jump to Hollywood-level directing jobs in the way that men can.

Hollywood is a business that’s becoming more and more cautious about taking risks. Studios don’t want to, and more frustratingly don’t need to, take a chance on a director who they’re not sure can handle the responsibility of a large film—the workflow, the VFX, the shooting schedule. It’s easy to point at directors like Chris Nolan and say, he makes thoughtful and artistic big budget films, so why can’t a woman who’s directed a fantastic indie film get a chance to do the same? But Nolan, like most of his contemporaries, spent years making smaller, proof-of-concept features that showed he was capable of handling a film of the size of Batman Begins. I think we need to encourage more women to really push the limits and make bigger films, even if they’re on a small budget.

TMS: Can you talk a bit about the Digital Bolex Grant for Women Cinematographers?

Schneider: Access to resources is the fastest way for an artist to build confidence in their skills, knowledge in their craft, and a body of work. From my experience, women don’t often have access to filmmaking resources in the same way men do, so I created the grant to share the resources I have with women who want to participate in making films but feel trapped by their lack of access. The grant is open on a rolling basis, and I’m going to be announcing the first two awards this week hopefully.

TMS: How was it working with Geek and Sundry (also a lady-owned channel in the still mostly male-dominated geek world) on Caper?

Schneider: Caper was an amazing project to work on, it was an extremely valuable learning experience for me and a chance to push my skills to the limit, and was probably the most fun I ever had on a shoot. Amy Berg, the EP and co-writer of the series with Mike Sizemore, hired me as the second unit cinematographer and B camera operator for the show, but eventually I also took on the role of promotional photographer and BTS photographer/videographer, since my previous experience in web had shown me how important it is to have promotional material to keep up momentum between episodes. Photos I took ended up everywhere from the LA Times to Nerdist, and on the Hulu page for Caper itself, so I’m extremely grateful to Amy for giving me the opportunity to participate in an environment where I felt comfortable taking the initiative to jump in where I thought I could be helpful.

The Caper set was very friendly and energetic, with a crew made up of a unique mix of television veterans and web series upstarts used to working on a more run-and-gun projects. Director Donald Murphy, who cut his teeth as an AD for Clint Eastwood, and cinematographer Joel Deutsch both did a great job of coming up with innovative ways to create big budget images and scenes on what was a relatively humble budget compared with the projects they’re used to, and Amy and Mike were a dream to work with. And also hilarious.

TMS: Headshots is a passion project for you. What can you tell us about it?

Schneider: I wrote Headshots in 2011, as a way to find catharsis for a handful of experiences that had been bugging me for a few years about acting, the film business, and Los Angeles, but I had to put the script aside to focus on Digital Bolex when I knew we would be mounting a huge crowdfunding campaign. Over the years since, a number of producers have encouraged me to make the film, including Jack Bennett and Adam Miller, who was the co-producer on Caper, and later Ryan Patrick McGuffey, who acted in Caper. I think a lot of people who read the script respond to and find resonance with the same experiences that had been nagging at me, and I’ve often had people message me asking what I was doing with the script months or years after they had read it. It’s a dark comedy, and my writing style with comedy, which I write very rarely, is is basically to make people feel so awkward they have to laugh to release tension; I’m not very good as a setup/punchline writer, but I’m great with schadenfreude, as you can see in my short Cuddle. Headshots is also equal parts action driven, particularly the second half of the script, so the project as a whole lets me balance the two thing I like the most about directing: working one on one with actors to craft an almost theatrical, dialogue driven performance, and action choreography that can provide interesting visuals, build adrenaline, and wow audiences.

TMS: What can we, the regular movie-watching public, do to help encourage the development of women in cinema have in film?

Schneider: The fastest, easiest way to encourage the development of women in cinema is to watch movies made by women. Watch women-directed films on Netflix; there are tons available. Buy tickets if you have independent theaters near you, or attend and support festivals that celebrate women filmmakers like the wonderful Etheria Film Night, held in LA at the Egyptian Theater and curated by the unmatchably witty writer Heidi Honeycutt, or the Stranger With My Face horror fest in Tasmania created by the equally hilarious Rebecca Thomson and Briony Kidd. Women are not a homogenous hive mind, so throw out your expectations of what you think a movie conceived by a woman might be, and take a chance on whatever sounds like a cool story. The screenplays of True Grit, E.T., Rebecca, Metropolis, and Singin’ in the Rain, so don’t get suckered into the notion that all women think alike or have some kind of estrogen-laden agenda. Women love all kinds of movies, and given the chance and the financial support of the public, they can make all kinds of movies too.

Elle Schneider will be leading a workshop on the Digital Bolex at the 5th annual No Budget Film Festival on Saturday, November 22nd in LA, and you can get tickets here. You can keep up with Headshots on Seed & Spark.