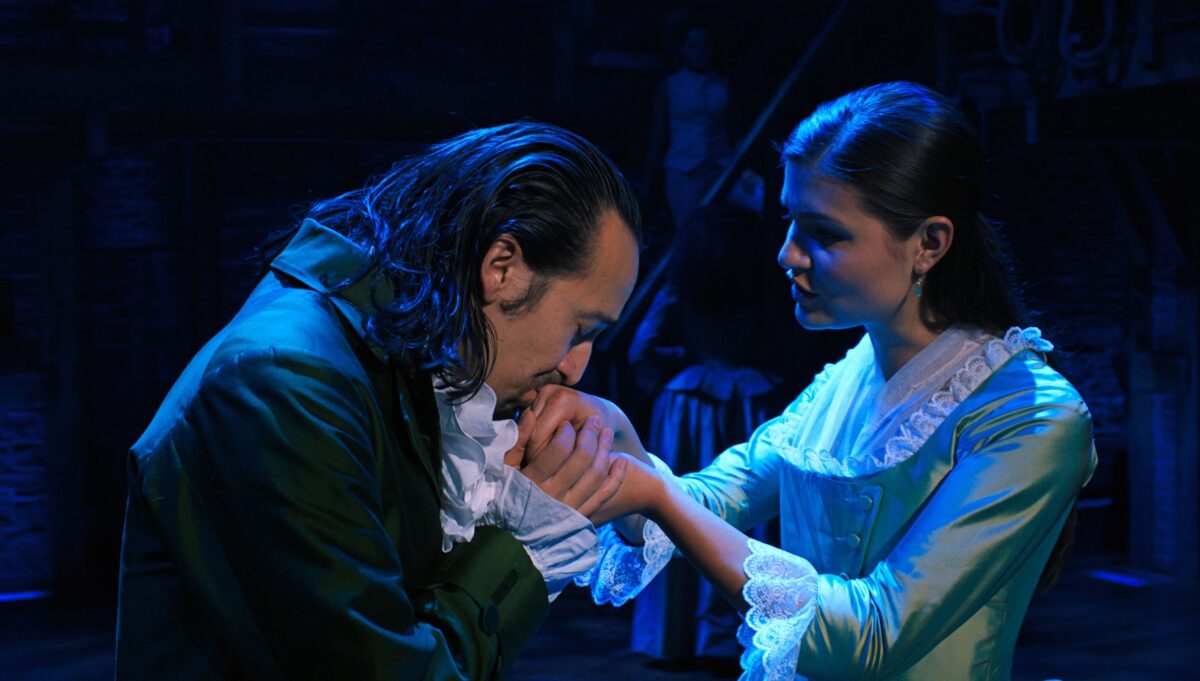 Hamilton is a musical that is up for interpretation in a lot of ways. Whether it is knowing the actual history of the Founding Fathers and then looking into the lyrics in a new way, or even just going in without any knowledge and seeing how it flows as a show, that’s all up to you. I am someone who broke my rule with musicals and listened to the cast recording before I saw the musical. (In my defense, I figured I’d never see the show, and then I had someone win the Ham4Ham and take me so I could see Jonathan Groff before he went on vacation.)

But there is a moment at the end of the show that still baffles audiences and has elicited a lot of conversation online with the filmed version’s debut on Disney+, so I wanted to get into it and talk about my own take, the reality that theatre is subjective, and what Lin-Manuel Miranda has to say about it.

**Spoilers for Hamilton lie below.**

Based on the book Alexander Hamilton by Ron Chernow, the musical gives us a look at the Founding Fathers in a way we’re not used to seeing them. That being said, the musical is still just that: a musical. So, there are theatrical elements that are up for debate—one being Eliza’s “gasp” at the end of the show. When Eliza Hamilton comes out during “Who Lives, Who Dies, Who Tells Your Story,” we’re reminded that without Eliza, we wouldn’t have Hamilton.

For me, the ending was always Eliza Hamilton getting to see what she helped to create. She was the one who gave the world Alexander’s story and success and, in doing so, gave us the ability to have Hamilton. It was her willingness to share his story, in the midst of being an incredible woman all on her own, that gave us this art.

This TikTok explanation pretty much explains my theory:

This explanation of the ending of #Hamilton tho 😭😍 pic.twitter.com/Hxz68x9nsR

That being said, Lin-Manuel Miranda has said (and tweeted about it again today) that the Gasp is up for interpretation.

*Spoilers*
It’s a lovely notion, (thank you @malloryannellis) but it breaks down the moment I’m not playing the role (how I wish you could see @JMunozActor or @JonRua, who also played Ham that first year!)
The Gasp is The Gasp is The Gasp. I love all the interpretations. ❤️ https://t.co/Khp8CAtTXT

Miranda and Tommy Kail also talked about the gasp during an interview with Wired for Tech Support. At about the 14-minute mark, they get a Twitter question about what the gasp means and say the following:

Tommy Kail: Again, that conversation, which is distinct with each Eliza, as I’m not answering the question because I’m not going to because I feel like that is actually between Eliza and Eliza. It was just something that came out of a very natural, organic process in rehearsal and in performance, and Lin was one of our greatest advocates for that moment existing. And it’s a testament to Lin and the generosity of spirit that that’s not written in the script. The show ends with the final lyric that he has written and the final notes, and yet he had the understanding that there was maybe another moment that could extend beyond that.

So, in a lot of ways, it depends on the actress, and also our views as the audience. For me, I’ve always seen it as Eliza seeing what her words and her determination to tell Alexander’s story did, and it makes me think about how the entire show, everything we know, is because Eliza Hamilton wanted to tell it.

I love Hamilton and will probably always be Hamilton Trash, and I’m okay with that.