Gene For Proteus Syndrome, Cause Of The "Elephant Man," Found 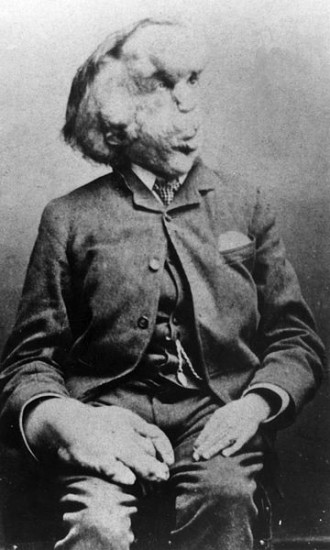 An international team of researchers has reported in the New England Journal of Medicine the discovery of the gene that causes Proteus syndrome. The disease is a very rare developmental disorder where uncontrolled growth of soft and bony tissue leaves its victims severely deformed. Approximately 500 people in the developed world are known to suffer from the disease, which was made famous in the late 1800’s when Joseph Merrick began touring as the “Elephant Man.”

The cause of the disease has long been sought after. Now, researchers know that the gene AKT1 is responsible. This gene is a well known (though rare) cause of some cancers. Leslie Biesecker, part of the team from the National Human Genome Research Institute (NHGRI) in the US that worked on the research, has studied Proteus syndrome for more than 15 years. To identify the genetic cause, the NHGRI researchers sequenced the exome (protein coding region of DNA) of tissue samples from six different patients with the disease.

In addition to the diseased tissue, the researchers also studied tissue that didn’t exhibit the uncontrolled growth characteristic of this disease, because Proteus syndrome was hypothesized to express genetic mosaicism. This is the idea that the mutation that causes the disease most likely comes from just a few cells of a developing embryo so that only certain parts of the body become affected. The researchers conducted a wide search for the troublesome gene going so far as to look at the DNA of affected patients’ parents and siblings.

At a press conference announcing the research Biesecker said:

“All bets were off in terms of what kind of a genomic aberration could cause this disorder.”

The researchers found that in nearly all of the affected tissue, there was a single nucleotide change in the AKT1 gene. This mutation did not appear in the unaffected tissues, suggesting that the mosaicism hypothesis was correct. Taking the research one step further, the researchers tested tissue from 29 other patients with Proteus syndrome, and found the exact same mutation of AKT1 in all but three individuals.

The mutation is located in a protein that controls the cell cycle and growth, and seems to make the protein overactive. AKT1 is also part of the same regulatory pathway as the PTEN gene, which was previously associated with Proteus-like disorders, but not with the actual disease itself.

Due to the fact that AKT1 causes some cancers, the gene has been studied extensively in mice. This means that there are already some drugs that target the protein, though the researchers say there is still much to do before their understanding of the mutation can lead to improved treatments for Proteus syndrome. Biesecker says:

“The trick will be to balance slowing down the mutation in the overactive cells without affecting the activity of the protein in normal cells, which might have connotations for health.”

In the future, the researchers would like to sequence the DNA from Merrick, that famous Elephant Man who put Proteus syndrome on the map. Merrick died at age 27 at The Royal London Hospital, which still has his bones and have granted access to the researchers so they can try to extract his DNA. They hope to have results, and confirmation about whether Proteus syndrome’s most famous patient really had the disease or just a related disorder, within a few months.