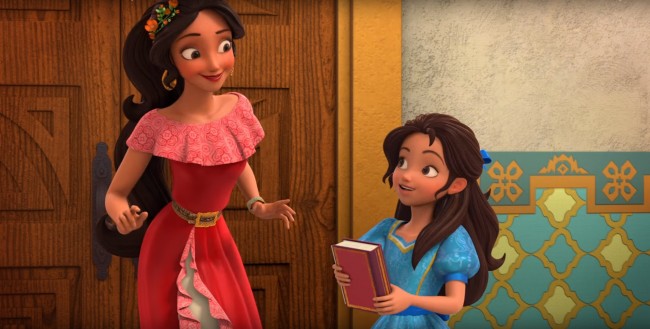 Of the eleven or so Disney Princesses that exist*, one is Asian (Mulan), one is Native American (Pocahontas), and one is black (Tiana). These princesses were added as of the mid-1990s. However, despite the fact that Latinx comprise 17% of the U.S. population and are the largest minority in the country, we had yet to see a Latina Disney Princess…until now.

Elena of Avalor is coming to the Disney Channel as a TV series that takes place in the same universe as the network’s Sofia the First and tells the story of an orphaned princess who reclaims her family’s kingdom from an evil sorceress and fights to keep her people safe. Check out the trailer:

In addition to the show, there will also be a feature-length, made-for-TV film in the fall called Elena and the Secret of Avalor which, according to Wikipedia, “will explain how Elena was trapped in the magical amulet for decades before being set free by Princess Sofia.” So, presumably, the Elena we get on Elena of Avalor has been released from an amulet — probably something to do with that evil sorceress.

I’m thrilled that this is happening, even as I’m disappointed that it’s taken this long, considering the size of the Latinx community. From the looks of the trailer, Elena seems like a great, fun character, and like she would be a worthy role model for young Latinas, teaching them the importance of standing up for themselves and those they love, the importance of family, and even more “progressive” lessons, like: Girls can be friends with boys without romance being involved.

According to Jezebel, Disney executive Nancy Kanter specified this as one of the show’s top priorities saying, “We wanted to make sure that [Elena] didn’t have a doll-like appearance, and we really wanted to steer clear of romance. She has male friends, as teenage girls obviously do, but we did not want it tinged with ‘Ooh, they’re falling in love.’”

While the fact of how doll-like she is or isn’t is debatable (I suppose she means by comparison to Disney Channel characters like Sofia?), it’s true that there doesn’t seem to be a romantic focus anywhere in the trailer they present, and the guy who’s there to “defend” Elena isn’t a love interest, but rather, a guy doing his job who may be a confidante for her throughout the show.

Merchandise will be hitting shelves the same day the show premieres, and the character of Elena will be incorporated into Disney theme parks, ensuring that the kids who will inevitably fall in love with the character will have access to her in the same places they have access to all the other princesses.

Now, a knee-jerk reaction to the news of Elena of Avalor could be “Why is she getting a TV show rather than a feature film? Doesn’t that mean that she’s less important than the princesses they give movies to?” Considering the fact that we’re in a Golden Age of Television right now, and that TV seems to be a better source of quality content these days than tentpole film-obsessed Hollywood, that’s not something that concerns me. Television comes into people’s homes, and if you already have cable, this show is not something that people will have to spend money on to have access to.

Television also happens a lot more quickly than film. For example, Mulan took four years from early development to being ready for release. We’ve already had to wait too long for a Latina princess. Personally, I’d rather this than them deciding now to make a feature film and needing to take another four or five years to get it together.

The thing that does concern me? She’s billed as the first “Latina princess,” but what does that mean exactly? Whereas Mulan is very definitely Chinese, Pocahontas was definitely Powhatan, and Tiana very much has a tie to her setting in New Orleans, Elena rules a fictional kingdom called Avalor that seems to be a hodgepodge of various Latin cultures. Jezebel reports that “The show will also introduce a host of original music, influenced by Chilean hip-hop, salsa, and mariachi.” So…Elena is Chilean, Puerto Rican, and Mexican?

Meanwhile, the New York Times further highlights the non-specific mish-mash of cultures by pointing out that the older characters in Elena’s life speak with non-specific Spanish accents, but that the Dominican Republic-born actress voicing Elena, Aimee Carrero, speaks with an American accent, furthering the notion that being “young and cool” equals “sounding American.”

Hell, even The Emperor’s New Groove, Disney’s other Latinx property, took place very specifically in ancient Peru, even naming its protagonist Kuzco after Cusco, the seat of Incan power in Peru. So why is it that a historical reference, or a connection to a real place, couldn’t be made here? “Latinx” is already a false group cobbled together by language and circumstances, but not much else. This just perpetuates that inaccuracy.

Still, the power of representation cannot be underestimated, and I don’t want to fall into the trap of nit-picking the positive steps forward and holding attempts at diversity to a higher standard than I would a story about a white character. After all, while Frozen is based on a Danish fairy tale, Arendelle isn’t a real place and most of the characters don’t speak with Scandinavian accents.

Elena of Avalor premieres on July 22 on the Disney Channel, and I’ll be watching. Because if I ever have a daughter, I’d like her to know that there’s a Disney character out there to whom she has a connection, however slight.

*I didn’t mention Moana in this discussion, because Disney has said that they are not considering her a “Disney Princess” because her lineage doesn’t come up in the film. Which, honestly, is much better. She’s a female Pacific Islander character, which is rad.