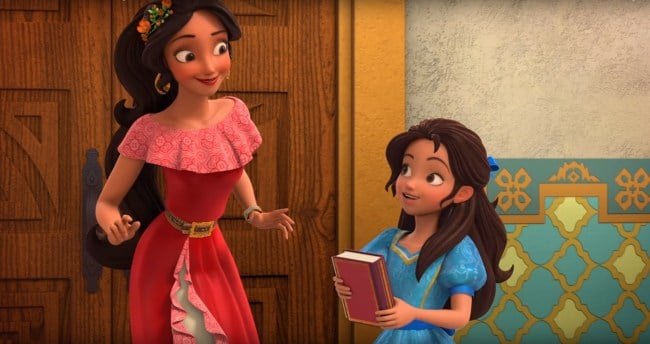 I was already really excited for the upcoming hour-long premiere of Elena of Avalor tomorrow night! I’m even more excited now that I know that George Takei will be doing a guest voice as a visiting royal! Check out this preview clip from the premiere after the jump!

This clip is from the second episode of the show, titled “Model Sister,” in which Elena has to find balance between a promise she made to her little sister, Isabel, and fulfilling her royal duties. Takei voices the visiting King Toshi, from the Japanese-inspired Kingdom of Satu.

This episode will air after the pilot in which, according to The Hollywood Reporter, “Elena officially becomes crown princess and rescues her sister, Isabel, from Noblins, elf-like shapeshifting creatures based on a Chilean peuchen myth.”

I love this clip, because we get to see the ambitious, overachiever side of Elena as well as the side that’s unsure and feels like she has a lot to live up to. We also get a glimpse into how cultures will be handled on the show. Specifically, that even as Elena of Avalor will be an amalgam of Latinx cultures, so too will be the cultures of the other lands with which Avalor interacts.

I know that in my previous piece about the show, I cited this as a potential problem, but the more I think about it, the more I think that this is a great way to allow kids from more non-white cultures to see themselves in the show. So, even though the voice actress who plays Elena, Aimee Carrero, is Dominican, girls who are Mexican, Puerto Rican, Chilean, etc, will get to see themselves, too. This isn’t a bad thing.