Elena Kagan Wishes You Wouldn’t Ask Her About Twilight [Video] 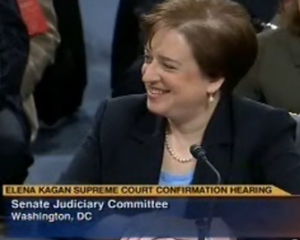 Klobuchar: “I keep wanting to ask you about the famous case of Edward vs. Jacob or the vampire vs. the werewolf.”

Klobuchar moved on by saying, “I know you can’t comment on future cases, so I’ll leave that alone…”

Really: Isn’t there any place left where Twilight references are off limits?