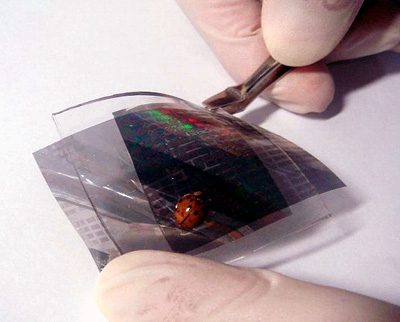 A flexible electronic sensor mimics the structure of a beetle’s wing, locking two sheets of tiny polymer fibres together to create a surface that can detect pressures as low as 5 Pa and, for the first time, distinguish between pressure, shear, and torsion. Considering how important it is for an android to be able to distinguish between someone shaking their hand and someone trying to rip their arm out, I’d say this is some important stuff indeed.

The sensor is developed by a team led by Kahp-Yang Suh at Seoul National University. Suh said the structure of the sensor was inspired by the locking mechanisms of a beetle’s wing – at rest, tiny rows of hair on the wings lock onto the hairs on the body.

They applied this to the sensor design, using two sheets of polymer carpeted with nanohairs 100 nanometers in diameter and 1 micrometer long. These are coated with a thin layer of platinum for electrical conductivity. The two layers, when put together, are drawn together by Van der Waals force, like a molecular Velcro, but do not crush each other as the hairs do not bend.

By looking at how the electrical current changes, Suh says the sensor can tell the difference between three types of force: pressure, where force is applied straight down; shear, where something is sliding along the surface; and torsion, where the sensor is being twisted. This is what makes this sensor particularly noteworthy. Other sensors so far can only detect total applied force, and cannot distinguish between different forms of touch.

A demonstration by the team shows the sensor tracking two ladybugs on a 64-pixel sensor network and recording the path of a bouncing water droplet. I didn’t think testing electronics could get so beautiful, but apparently it does. One day, an android will be able to feel all this and store it in its memory, while we humans continue experiencing them as a tiny transient tingle.

Before they use it for androids though, the team is looking to use the sensor as a heart monitor. Their tests showed they only had to tape the sensor on the skin above the pulse point for it to register a heartbeat. Good stuff. 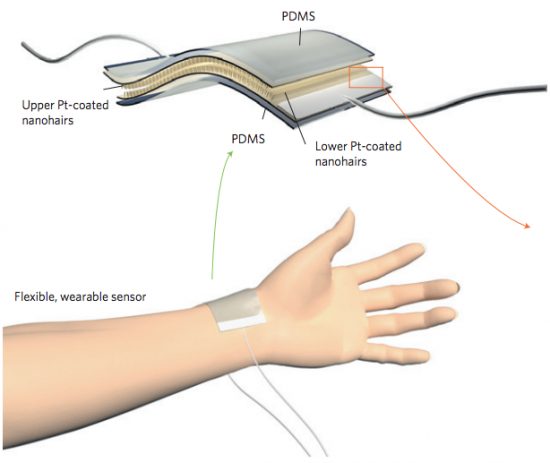 If they ever get around to making androids with this, we can know for sure that when we hug them, they will hug us right back, and feel every bit of it. Unless, of course, we hug too hard, which will initiate a threat-reduction response involving getting tazed in the face.