The Edge of Seventeen Invalidates Teenage Depression, and That’s Not Okay 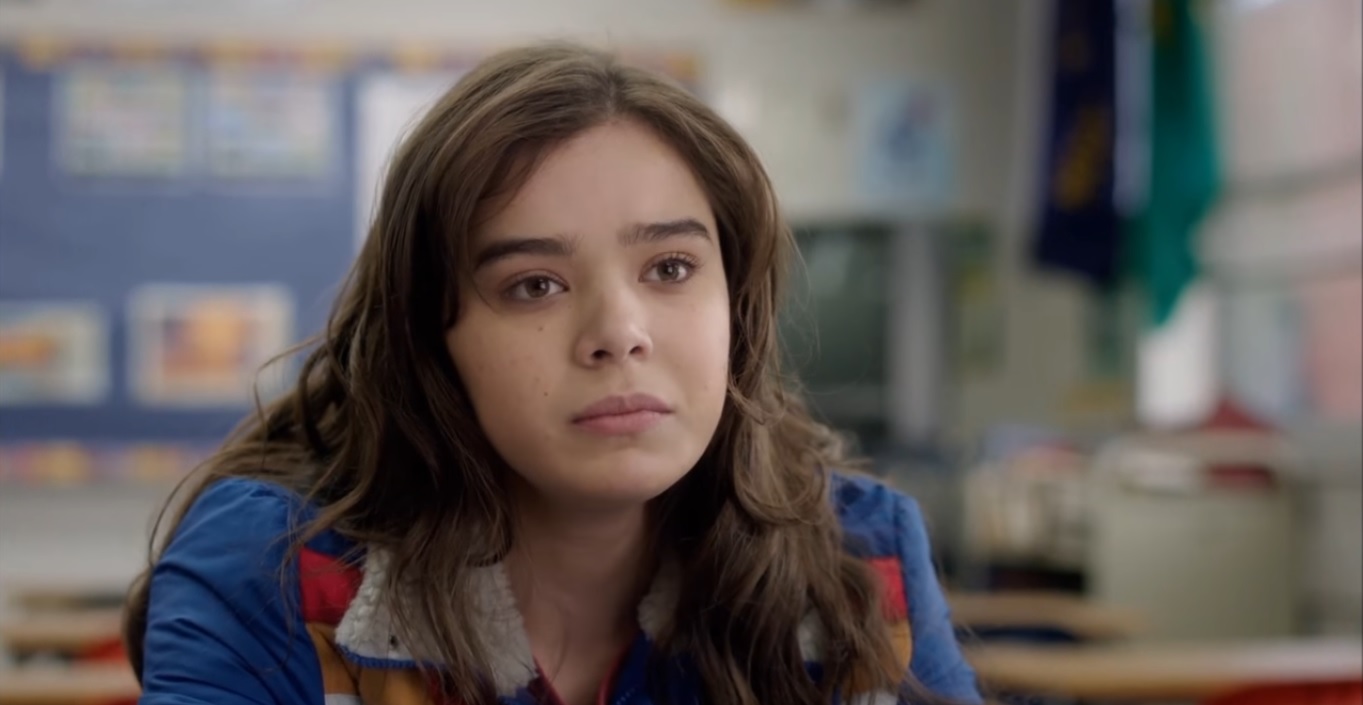 I went to see The Edge of Seventeen with some preconceived notions from watching the trailer. I knew I probably wouldn’t like Woody Harrelson’s teacher character, just because he seemed like a cheesy trope. I knew I’d probably really like Hailey Steinfeld as the protagonist Nadine. And I knew I was in for some teenage comedy nostalgia. I was not prepared for a depressed character who feels suicidal, and even less prepared for the movie to not take her seriously.

While The Edge of Seventeen tries to be the familiar teen comedy, it feels as though Nadine is being forced into that narrative. Nadine’s mental illness and grief, her family trauma, her self-hatred and destructive behavior—all of these point to something much heavier than teen angst. And that’s where The Edge of Seventeen ultimately fails.

We like Nadine immediately. She takes us back in time, and explains that she’s the black sheep in her family—while her brother has succeeded socially and at school, she has struggled. Her relationship with her mother (Kyra Sedgwick) has always been tumultuous, but her dad had her back, and eventually she found solace at school in her one great friend, Krista (Haley Lu Richardson).

Flash forward to a teen angst moment in 2011: Nadine gets a terrible haircut and is completely distraught. Her dad takes her out for cheeseburgers to help ease her pain—and has a heart attack and dies on the way home. This is when things get much worse.

When we meet Nadine again five years later, she hates everyone (herself the most) and her relationships with her mother and brother have disintegrated completely. Maybe we could’ve written her behavior off as “angst” before, but now, Nadine is depressed. And when Krista, her one friend, begins dating her perfect brother Darian (Blake Jenner), Nadine truly becomes isolated. She cuts ties with Krista, and for the rest of the movie, we follow Nadine’s spiral downward into a major depressive episode.

We could say that the Krista/Darian dating thing set off Nadine’s depression, but there’s evidence it was there before. Nadine has a saved prescription bottle of antidepressants from the month after her father died. When she drinks with Krista, Nadine’s the one puking at the end of the night. When Krista and Darian start dating, Krista pleads tiredly with Nadine to be reasonable. Krista wants to date someone, go to a party, make some new friends. Nadine’s depression makes her hate the world, and part of this friendship breakup, I think, is that Krista doesn’t want to hate it with her anymore.

So Nadine has no one to sit with at lunch, and turns to her history teacher Mr. Bruner (Woody Harrelson). Again, I thought I would dislike this character just for his cheesy concept, but as I watched their relationship unfold, it became so much more than that. Nadine confides in him, and he makes fun of her and puts her down, over and over. In their pivotal scene, Nadine tells Mr. Bruner that she’s going to kill herself, and describes in detail the way which she would prefer to do it. She’s had a horrible day—she wouldn’t get out of the car to go to school, so her mom took her to work, where they had a terrible fight. Nadine then stole her mom’s car and wound up at a playground, where she accidentally texted a graphic sex proposal to her crush. This is what leads her to Mr. Bruner’s office (he reads the entire text, by the way, which is so beyond inappropriate I cringed so hard my skeleton left my body).

So she tells him she’s going to kill herself. She continues to make jokes in this moment, and I suppose we’re supposed to laugh. But Mr. Bruner’s reaction was downright chilling to me—he mocks Nadine, saying that he, too, is writing a suicide letter, because he has an obnoxious student that won’t let him eat lunch alone. Nadine yells back: “You’re so going to get fired when I actually do it!” And he responds, with a tight smile, that he can only dream.

To me, Mr. Bruner’s response came off as irresponsible and cruel. But when I went to read up on the movie, I found a different opinion in some major reviews. Vanity Fair refers to a “mostly unserious suicide threat”, and explains that Harrelson’s character wisely knows she won’t actually do it. The New York Times‘ review calls their banter a “chief delight” of the movie, and says Mr. Bruner’s humor cuts through Nadine’s “grandiosity” (her suicide threat).

Perhaps Mr. Bruner’s jokes, when directed at a typical comedy “teen angst” lead, might’ve been ruthless and funny; if, like the film shows us earlier, Nadine’s problems were still simply a bad haircut or an embarrassing text message. But I had a really hard time believing Mr. Bruner wouldn’t have directed her to a guidance counselor in this moment, and in many moments before. And because he didn’t, I didn’t trust him, and I couldn’t find him charming at all. He does give her his phone number in case anything bad happens. But the bad thing had already happened: he’d just had a student, who he has previously observed as being in psychological distress, tell him she wants to commit suicide. That is the moment when you do something.

If this movie was trying to comment on the need to identify students who are in distress, I would be more on board. But Mr. Bruner is given “funny” dialogue (“Maybe nobody likes you, Nadine”), and in the end, he gets to be a hero when he comes and pick her up from another bad situation. But he doesn’t defend her when her brother shows up and yells at her. And he doesn’t step in and say he wants to send Nadine home with her mother instead.

I had no idea how this movie was going to end. I hoped it would end in a new prescription, therapy, maybe family grief counseling for everyone, a real conversation with her best friend…anything to indicate things might get better for this young person.

But apparently, I needn’t have worried: one apologetic conversation with her brother, and Nadine wakes up the next morning happy and ready to take on the world. She has a brief, pleasant exchange with Krista, and then bounces over to her classmate’s film festival, where she confesses her love for him. He puts his arm around her, and introduces her to all his film festival friends. All is well.

It happened so quickly, I watched the credits still stunned. On the one hand, I’d just seen what looked like a very honest portrayal of teenage clinical depression in a Hollywood movie. That was important. On the other, I felt so betrayed: how could they pretend that everything Nadine went through could be fixed overnight, and that they could end this story in typical rom-com fashion? A performance, a confession of love… “a boy will fix all your problems”? Really?

In retrospect, it made sense. The Edge of Seventeen refuses to fully validate Nadine’s obvious clinical depression at every turn. Perhaps the lead character they wrote didn’t fit the movie the creators were trying to make. Maybe the movie they were trying to make became distorted in an effort to make something more mainstream. Whatever the cause, the end result thoroughly invalidates young people with mental illness. And we really don’t need more of that.

Molly Booth is a freelance writer and author of the YA debut, Saving Hamlet, out now from Disney-Hyperion. She writes books about Shakespeare and feelings. She was homeschooled through high school, which means she gained her Geek/Nerd/Dork Certificate at an early age. She lives in Portland, ME and has almost too many pets. Almost. Follow Molly on twitter and tumblr for more nerding.