Yet another theory just cries, "Aliens!" 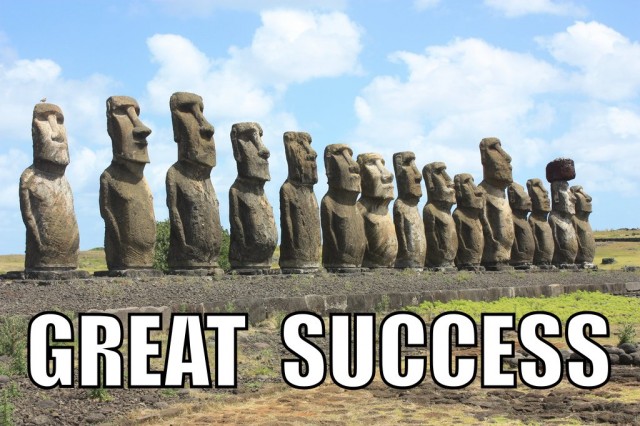 Most people view Easter Island as a failure — an example of the dangers of exhausting limited resources. Anthropologists Terry Hunt and Carl Lipo have written a new book, The Statues That Walked, that looks at it different. Their proposed theory states that rats, not humans, are to blame — but also to thank.

The classic view of Easter Island is that the people there overused their resources, and left the island desolate without trees or many of the species that were once found there. Hunt and Lipo suggest that it wasn’t the human islanders responsible, but rather the rats they brought with them.

With abundant food and no predators on the island, rats that stowed away in the canoes of the original settlers of Easter Island could reproduce in great numbers. While the humans there did slash and burn trees for farming, the rats prevented any new growth from coming up by feasting on young tree shoots and roots.

Blaming rats doesn’t sound like much of a success, so Lipo and Hunt say it’s the ways the islanders survived and indeed thrived compared to other humans at the time that is the real success story. While rats negatively impacted food sources on the island, they themselves became one. Archaeologists found rat bones in garbage heaps on the island, indicating they were being eaten.

The islanders managed to stay well fed on rats, and through some creative agriculture, they broke up rocks and spread them out over fields. This helped add nutrients to the soil, allowing for some vegetable growth that would have otherwise failed on the island.

Oh yeah, and the islanders also made giant stone statues. That’s a pretty big deal, too.

(via NPR, image via Arian Zwegers)