E. Coli May Prove to Be Excellent at Creating Biodiesel 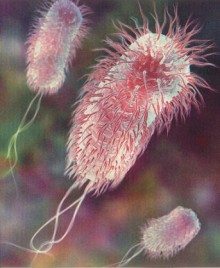 E. coli, popular intestinal bacteria often associated with fecal contamination, may have some hidden talents up its sleeves according to recent discoveries by Chaitan Khosla, a professor of chemistry and chemical engineering at Stanford. It seems that while some strains of E. coli can cause food poisioning, the strains that are naturally present in the human intestine — yes, it lives in there — could prove to be particularly good at creating fatty acids that are similar in make-up to gasoline directly from sugars and plant matter. That’s way more important than it sounds at first.

Right now, when it comes to biofuels, ethanol is out in front. That’s not necessarily because it’s better, but rather because it’s cheaper and easier to make. Biodiesel is actually closer in composition to traditional fossil fuels, but it’s a little harder to come by at the moment. Currently, if you want to use biodiesel fuel, you get it from animal fat. That’s what people are doing when they recycle oil from restaurants and the like. The problem is, according to the rules of biomass transfer efficiency, if you want to get the really efficient stuff, you want to go as far down the food chain as possible, close to the sun. That’s why E. coli’s ability to go straight from sugars to biofuel could be a big breakthrough. It skips that pesky “herbivore” step.

Now, while E. coli has been proven to have a lot of potential for this, a lot of horsepower so to speak, it never actually operates at full power under normal circumstances. There seem to be some kind of biological limitations put on the cells that keep them from working at the level of output that mass biodiesel creation would require, despite the fact that they totally have to power to do so when they’re tuned just right.

What Khosla and his team are working on now is trying to modify the E. coli engine to remove whatever is limiting the production rate. In order to do this, they’ve isolated all the enzymes and such that are involved with the actual conversion process and are experimenting with them in a test tube; they’re taking the engine out of the car and messing with it in the garage.

The automotive analogy isn’t just some kind of over simplified layman’s explanation I just pulled out of the air, Khosla uses it himself when trying to explain the project.

“The question we were asking is analogous to asking what limits the speed of my Honda to 150 miles an hour and no faster? The most direct and powerful way to figure it out is to pull the biosynthetic engine out of the cell and put it through its paces in a test tube.”

With any luck, Khosla and his team will find some kind of inhibitor that keeps the E. coli from producing biodiesel at an absurd rate in order to protect the lining of the intestine or something. That way, once the E. coli has been removed and being used for something else all together, that little switch can just get turned off and we’ll be swimming in biodiesel. Hold on to your hats folks, if we’re lucky, E. coli might become a magic word instead of a dirty one.