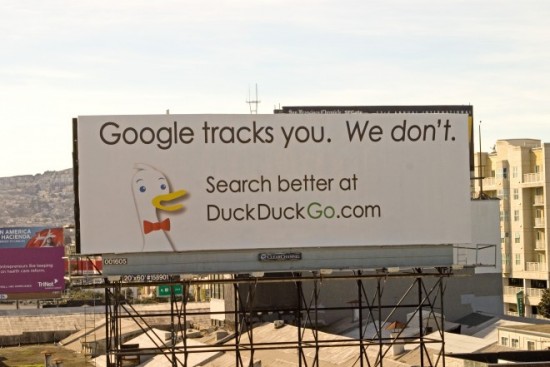 DuckDuckGo has a following among web geeks, but the search engine is by no means a household name like Google or [current Geekosystem advertiser] Bing. But founder and sole employee Gabriel Weinberg hopes to change that, and he’s gone on the offensive with the above billboard, which takes a swing at Google over its habit of tracking user searches.

According to Wired, Weinberg paid $7000 to rent the billboard space in San Francisco’s SOMA neighborhood.

Weinberg’s search engine avoids the problem of referrers — the habit of web browsers telling a new webpage what page you just came from — by doing a quick redirect any time you click on a link in DuckDuckGo. Like Google, DuckDuckGo also offers an HTTPS version of its search engine, which naturally only passes the top-level domain you are coming from (e.g. https://google.com), instead of passing the entire url along (e.g. http://www.google.com/#sclient=psy&hl=en&q=what+I’m+searching+for).

Google’s search results have come under fire lately from the techy set as well, thanks to the proliferation of companies that game search to return low-quality, mass produced copy ladened with ads; a recent Lifehacker poll found that 77% of the site’s plugged-in readership thinks that Google’s results have gotten less useful lately.