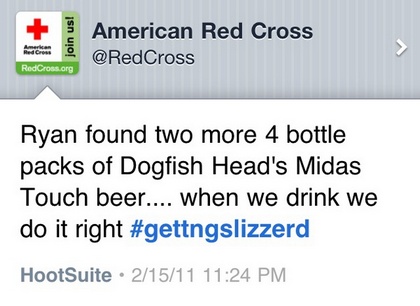 Last night, the above tweet appeared on the Twitter account of the American Red Cross, showcasing something pretty inappropriate for an emergency assistance humanitarian organization. The culprit of the odd tweet was simply someone who had access to the Red Cross Twitter account, and made a mistake using HootSuite. The Red Cross handled the situation pretty entertainingly–something that doesn’t happen much these days–and released a charming followup tweet. The best part about all of this, other than the calm (or cold, calculating and secretly terrifying?) poise of the Red Cross, is that the Red Cross managed to turn this digital faux pas into receiving donations (which further solidifies the calculating and terrifying theory), as Dogfish Head Brewery, whose beer was mentioned in the accidental tweet, encouraged donations.