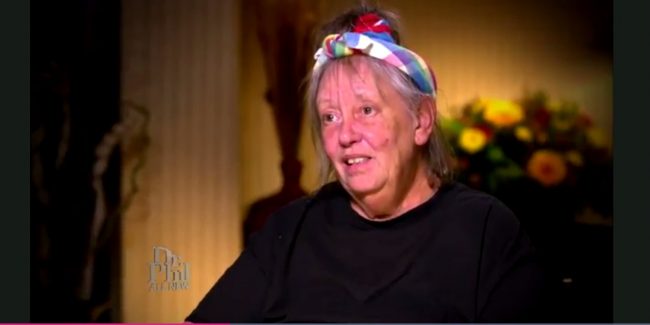 Shelley Duvall, best known for her role in Stanley Kubrick’s The Shining, is appearing on Dr. Phil’s show today to talk about her mental illness. In a clip that made headlines, Duvall admits to being sick and needing help. She confides in him a number of things, like the fact she believes Robin Williams is not dead, but a shapeshifter and that she was threatened by the fictional Sheriff of Nottingham from Robin Hood.

The clip earned a number of criticisms towards Dr. Phil (who is, in fact, not a licensed counselor anymore) for being exploitative and cruel for the sake of cheap entertainment. Vivian Kubrick, daughter of the iconic director and composer, notably wrote a letter calling it “a form of lurid and exploitative entertainment” and “heartless.”

My Letter to you @DrPhil
Re: Your exploitive use of Shelly Duvall is a form of LURID ENTERTAINMENT and is shameful. pic.twitter.com/4f6MRTzr0A

Ronan and Mia Farrow also voiced their anger and advised people not to watch the episode. Kubrick, however, went another step further in her support of Duvall and started a GoFundMe for the actress, writing:

“Like many older movie stars, embarrassed finances is not uncommon. Showing your love and support for Shelley Duvall by making a donation can start her back on the road to independence and perhaps back to health and for her fans, more superb performances!”

Dr. Phil is not the help that Duvall needs,

Update: A number of commenters have pointed out that the Go Fund Me is not affiliated with anyone close to Duvall and Kubrick’s scientology background makes it suspect.

(via The Hollywood Reporter, Image via screencap)