Dr. Dre Wants to Make an Instrumental Album About the Solar System 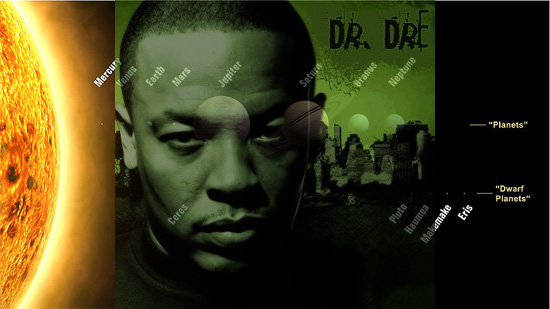 In a recent interview with Vibe, legendary hip-hop producer and rapper Dr. Dre sent us into a collective swoon when he let it drop that “for a long time,” he’s wanted to make an instrumental album about Earth’s solar system called The Planets. Each track would consist of Dre’s interpretations of the planets in the solar system. And he’d need surround sound to convey the majesty of Saturn.

An instrumental album is something I’ve been wanting to do for a long time. I have the ideas for it. I want to call it The Planets. I don’t even know if I should be saying this, but fuck it. [Laughs.] It’s just my interpretation of what each planet sounds like. I’m gonna go off on that. Just all instrumental. I’ve been studying the planets and learning the personalities of each planet. I’ve been doing this for about two years now just in my spare time so to speak. I wanna do it in surround sound. It’ll have to be in surround sound for Saturn to work.

While this would be an exciting foray into space-themed hip-hop, it wouldn’t be the first: Kool Keith pioneered the form with his insane, awesome, insanely awesome Dr. Octagon persona, “an extraterrestrial time traveling gynecologist and surgeon,” the Beastie Boys had “Intergalactic,” Public Enemy’s Fear of a Black Planet wasn’t really about space but it had a great cover, and Ghostface Killah’s “The Sun” (feat. Raekwon and Slick Rick) is the sweetest, totally unironic ode to the sun you’ve heard. (Some lyrics NSFW).

“Check out my nephew, he jumped up in the window just to see you / Look what he drew, a car, house, always wants to be with you / He’s just as Jolly, He always begging me to let him see you / I’m like “probably if you clean up, and read a little.”

(Vibe via The Atlantic via @Slate. Title image via Nazcar Pine and Wikipedia)