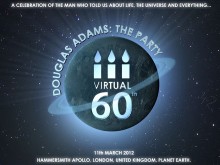 Douglas Adams, the author of that staple of sci-fi satire The Hithhiker’s Guide to the Galaxy, died 11 years ago at the tender age of 49. For me, and likely for others, it was the first time that an icon of mine died. To celebrate his life and what would be his 60th birthday, his friends and family are putting together an enormous party featuring comedy, Adams’ college plays, and music. If you happen to be in London on March 11 at 5:00 P.M., you can take part in this most exciting of revelries.

The even will be taking place at the Hammersmith Apollo theatre in London. Tickets are already available, and the proceeds of the show will go to two of Adams’ favorite charities: The Environmental Investigation Agency and Save the Rhino. Careful readers will recall Adams’ interest in endangered species (See: Last Chance to See) and how the author once walked up a mountain in a rhino suit for said charity.

If snag tickets for the event, you’ll have quite the night of entertainment ahead of you.

And a musical performance by Adams’ dream band, which performed at the late authors memorial service and was outlined by Adams himself:

My absolute dream rock band no longer exists because their rhythm guitarist was shot. On vocals I’d have Gary Brooker, the greatest soul voice of British rock and roll and a hell of a piano player. Two lead guitarists (they can take turns to play rhythm): Dave Gilmour, whom I’ve always wanted to hear play with Gary Brooker because they share a taste for huge drama and soaring melody lines; and Robbie McIntosh who is both a great blues rocker and an exquisite acoustic guitar picker. By the time you’ve got a band this size you more or less have to have maestro Ray Cooper in it as well, on percussion, though it would also be very tempting to include the incredible woman percussionist Jodi Linscott from Van Morrison’s band. Strings? Brass section? Royal Philharmonic? A New Orleans jazz band? For all that you’d need synth wizard Paul ‘Wix’ Wickens. And a very large truck.

All in all, it sounds like one hell of a night.