The Doubleclicks Write Songs About Literally Everything | The Mary Sue

Interview: The Doubleclicks Continue to Rock, Are Writing Songs About Literally Everything 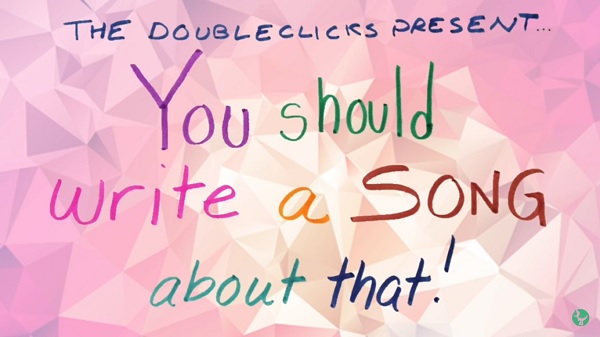 Just because they write geeky songs doesn’t mean they can write a song about any geeky topic…or can they? This conundrum is at the heart of The Doubleclicks’ latest project, “You Should Write a Song About That.”

“That project came about for a few reasons,” says Angela Webber, one half of the sister singing duo. “Frequently, people will say to us, ‘You should write a song about that,’ about any kind of nerdy topic that they’re passionate about. They perceive that we write songs about nerdy stuff, so we should write a song about whatever nerdy thing they’re talking about, whereas what we really do is write songs about what we care about and they have nerdy references.

“On the other hand,” she continues, “some people say to us, ‘Well, you should write a song about this thing’ and it’s actually really interesting because it hits us on an exciting level. And those are usually people who are scientists or writers or friends who have been developing interesting project. So we decided to start this project where we interview a fascinating person…about something, and then we write a song about the thing they care about.”

The first episode, which premiered two weeks ago on their YouTube channel, is an interview with former editor for The Mary Sue Sam Maggs, about her book Wonder Women, with the song specifically about Anandibai Joshi.

Angela says that the approach to this project is similar to how they write many of their songs. “We gathered all of the emotional data from [Sam], because she was so passionate about this person. We gathered it all, and we wrote it down, and we found the emotional core of what she was talking about, which was that this woman, Anandibai Joshi, a lot of things were in her way. There were a lot of setbacks. When she saw those setbacks, she just turned around and went the other direction and found a way to do it without a setback. And that became the chorus of our song.”

While Angela is the primary songwriter, Aubrey also helps with the instrumentation and arrangement. And Angela knows that one of the challenging things about writing is the desire to keep tinkering with it. So, she makes sure that she sets deadlines. For this, her deadline is to write the song in two days after the interview. “The goal with this is that we’re able to play the song for the person that we interviewed pretty quickly so that they’re still excited, which is why that’s short,” Angela says.

Some songs take longer than others to write, with some songs percolating for months before it becomes reality. Angela told us another one of their recent releases, “Lord of the Rings,” was in her head for about nine months.

Released on September 29, this song is, according to Angela, “part of an upcoming set of songs that we’ve written that have a more serious approach to them. They’re kind of our first love songs in a while.” The song is part of their upcoming album Love Problems.

The song, about breaking up and how the things you liked with your ex now are tinged by that breakup, is also about how friends can help you. “I was really proud to finally get that song out,” Angela says. “It’s a song about really tough things and how when something terrible happens to you, you can’t really get over it. [It’s] a frustrating moment. But when you have your friends around and you find the more positive things, you’re able to handle the bad stuff coming back.”

The reason behind this is their desire to not be labeled. Angela says, “This is actually something I’m very passionate about: finding your own box and your own label. I just don’t think about them too hard. We do want to write serious songs, and we do want to write fun songs. We want to write comedy songs, we want to write songs that kids can listen to, but we also have some stuff to address that kids shouldn’t listen to. And because we are just on our own, we don’t have a label or a company or an agent or a manager, there’s nobody telling us we can’t do that. So, we’re very lucky in that we just kind of do what we want.”

Thankfully, in today’s music industry world, being their own management/agent isn’t a bad thing. Aubrey says, “I took a lot of classes about the music industry, and it never taught anything about what we’re doing now, which is really refreshing to me. I realized when I was doing other bands, we couldn’t get anywhere if our band leader didn’t try self promotion and wasn’t like actively trying to interact with the audience, which is super important to what we do, and was really fun when we started to be connecting with the audience over the internet from the very beginning.” As a result, they make interacting with their fans a vital part of their brand, which includes their monthly live show on their YouTube channel.

But when it all comes down to it, they just want to be themselves. Angela refers to their song “Tiny Paper Elephant,” with the lyrics “the thing that makes you different is what really makes you shine.” She says, “If you don’t fit very clearly into one box or another, like if you were a cat that couldn’t meow—a cat that could only bark—you would be a bad cat and a bad dog, but an amazing barking cat, and that’s kind of what we go for. Like, we’re not going to be the best comedy band because we do play occasionally serious music, and we’re not going to be the best, like, pop band because we have a lot of nerd references. We go a lot of different directions and we can’t focus on one thing. But we can be the best, like, nerd/folk/pop/feminist sister duo that we can be, and that is what’s working for us.”

For more information about The Doubleclicks, visit their website.

Angie Fiedler Sutton is a freelancer who writes primarily for SciFi4Me.com and her own blog, where she covers geeky topics and the performing arts. She’s been published in Stage Directions, Den of Geek, and LA Weekly. You can see more of her work (and her social media connections) over at her website, angiefsutton.com.