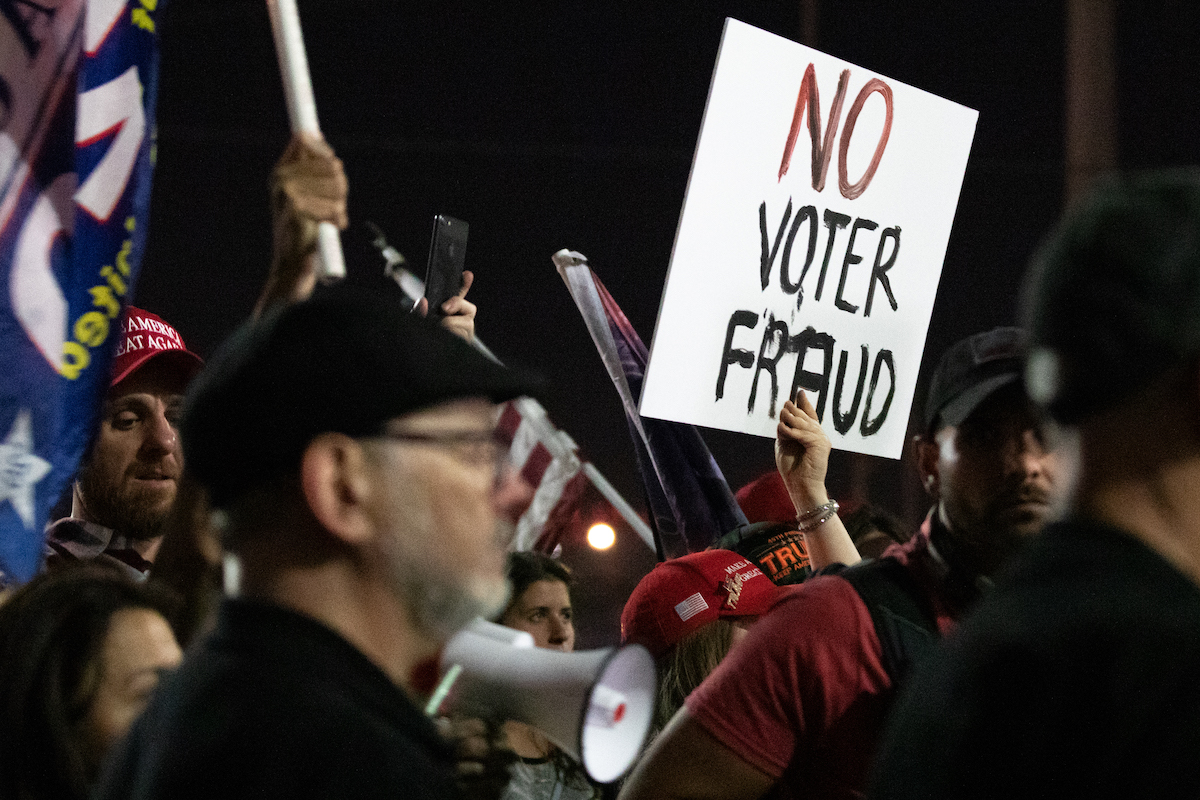 As his path to reaching the necessary 270 electoral college votes needed to win reelection becomes less and less realistic, Donald Trump is flailing for a comeback strategy. The one he seems to have landed on is to demand that states just simply stop counting votes. Except in the states where he thought votes weren’t being counted enough. Or the states where he wanted votes to be counted again.

In Detroit, mobs of Trump supporters have gathered outside of polling centers, chanting “Stop the count,” something Trump has also been tweeting. This is an especially strange demand given that Biden has been ahead in Michigan, meaning that if these people did somehow get their way and election officials stopped counting absentee ballots, their candidate would lose.

#BREAKING: Large, animated crush of “stop the count” protestors trying to push their way into TCF hall in #Detroit where ballots are being counted.

They’re being blocked by guards at the door.

In Maricopa County, Arizona, an equally aggressive crowd of Trump supporters have a different message. They have been chanting “Count those votes” at the people … currently counting votes. They were seemingly spurred by a quickly debunked conspiracy theory that Republican voters were given Sharpie markers for their ballots, which then caused problems with the ballot readers. (They’ve also been chanting “Fox News sucks” after the network called the state for Biden.)

Meanwhile, over in Wisconsin, Trump is pushing for a recount after appearing to lose the state by about 20,000 votes.

If this whole stop the vote/count the votes mixed messaging sounds familiar, it might be because it was literally the plot of an episode of Veep.

Trump doesn’t really have any factual basis for his demands to stop/redo vote counts, but when has that ever stopped him? His Twitter account today is just a mess of tweets that have been hidden and flagged with warnings of misinformation. Many of them are retweets of retweets of outrage over something that if you follow the story back to its source, has been deleted because it is, you guessed it, totally fake. Trump isn’t actually trying to uncover election fraud, he’s just trying to sow discord and make sure his base doesn’t trust the election process, just as he’s been doing for months, or really years.

Similarly, the multiple lawsuits the Trump campaign has filed to stop counting ballots in various states don’t have any actual legal basis. He seems to be angling for a Supreme Court victory like we saw in Bush v Gore back in 2000 (because he doesn’t understand that that’s not going to happen) and/or he wants to drag this process out long enough that states miss the December deadline to report their final electoral numbers. Either way, they’re totally baseless moves from an infamously litigious loser.

“A lawsuit without provable facts showing a statutory or constitutional violation is just a tweet with a filing fee.” —@_justinlevitt_ https://t.co/u3QWmAHt3q