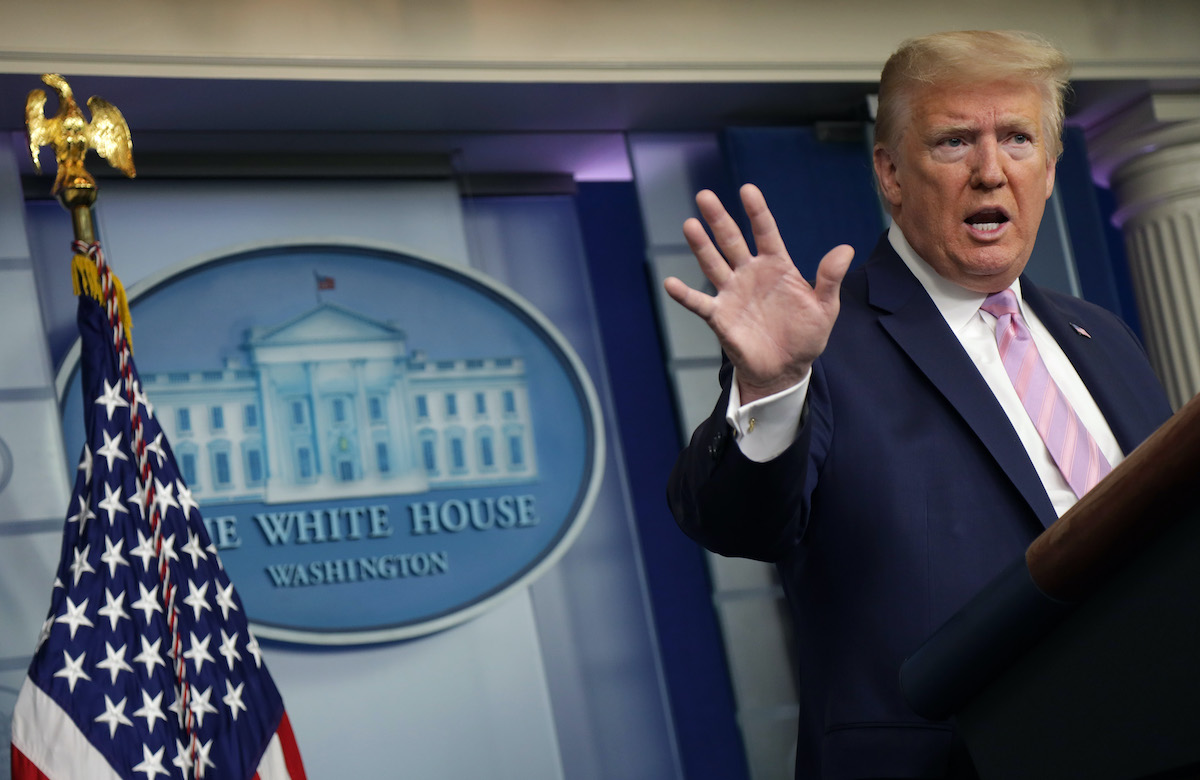 Donald Trump took to Twitter Friday morning to encourage people to “liberate” their states. In context-free, all-caps tweets, he called for the liberation of Michigan, Minnesota, and Virginia, going so far with the latter tweet as to heavily imply he was calling for a violent liberation.

“LIBERATE VIRGINIA,” he wrote, “and save your great 2nd Amendment. It is under siege!”

LIBERATE VIRGINIA, and save your great 2nd Amendment. It is under siege!

What do all of these states have in common? Well, they all have Democratic governors who have recently expanded their states’ stay-at-home orders. All three states have also seen protests in recent days in response to those directives.

A group called “Liberate Minnesota” organized a protest outside the home of Governor Tim Walz. A “Liberate Virginia” group organized a similar protest at the home of Governor Ralph Northam, who recently signed stricter gun control bills into law and is being sued by guns rights groups that want gun ranges to be considered “essential businesses” so they can stay open. (He also, by the way, loosened the state’s restrictions on abortion.)

According to the Washington Post, Fox News ran a segment on the groups just minutes before Trump posted his tweets.

In Michigan, “Operation Gridlock” brought thousands of cars and trucks out to the capital of Lansing, clogging the streets as a way to protest Governor Gretchen Whitmer’s–who Trump recently referred to as “the young woman governor”–stay at home order. Although, as Whitmer herself told MSNBC’s Joy Reid, that was only part of the issue here.

Half protest, half Trump rally is how I would characterize #OperationGridlock in Michigan. Protesters echo “Half Whit”nickname @realDonaldTrump bestowed on Gov. Whitmer, call on her to reopen the economy. pic.twitter.com/ui8Y4JFVDS

Proud Boys stopped at a green light to block traffic in front of Sparrow Hospital pic.twitter.com/tIGBcSESPe

Oh look, #OperationGridlock has created a traffic jam IN FRONT OF A HOSPITAL pic.twitter.com/7nIoKN1Wl1

Other states are seeing protests this week as well, including Wyoming, Ohio, and Utah. So why isn’t Trump calling to “liberate” those states? Well, for one thing, they all have Republican governors who haven’t been publicly criticizing Trump’s response to the coronavirus. But whatever the reason, calling for any state’s liberation over its leader’s decisions regarding stay-at-home directives is completely hypocritical and contradicts’ Trump’s own statements. (But what else is new?)

Trump has been ping-ponging back and forth between how much power he thinks the federal government should have in reopening the country versus what the states can and should be doing. He wants to take credit for everything that can be framed as a victory while blaming governors for the ways the pandemic has hit their states individually.

The States have to step up their TESTING!

One day, he’s declaring his “authority is total” and the next he’s admitting “every state is very different,” saying “if they need to remain closed, we will allow them to do that.”

Now we’re back to needing to “liberate” states, which sounds a lot like his weird assertion earlier this week that governors were staging a “mutiny” against him.

I hope someday we can look at today’s meltdown as something to be pitied, rather than condemned.

But we don’t have that luxury today. There is too much at stake. 6/7